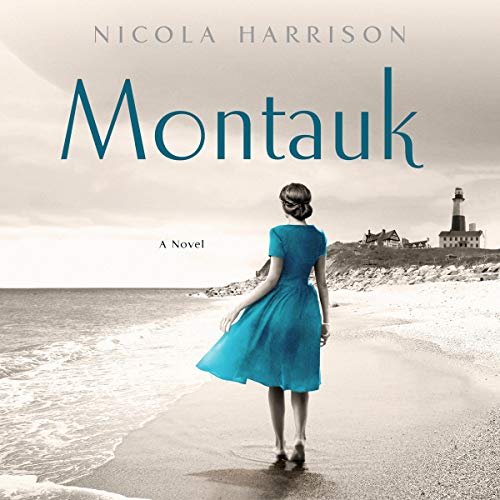 An epic and cinematic debut from Nicola Harrison, Montauk captures the glamour and extravagance of a summer by the sea with the story of a woman torn between the life she chose and the life she desires.

For three months, this humble fishing village will serve as the playground for New York City’s wealthy elite. Beatrice Bordeaux was looking forward to a summer of reigniting the passion between her and her husband, Harry. Instead, tasked with furthering his investment interest in Montauk as a resort destination, she learns she’ll be spending 12 weeks sequestered with the high society wives at the Montauk Manor - a 200-room seaside hotel - while Harry pursues other interests in the city.

College-educated but raised a modest country girl in Pennsylvania, Bea has never felt fully comfortable among these privileged women, whose days are devoted not to their children but to leisure activities and charities that seemingly benefit no one but themselves. She longs to be a mother herself, as well as a loving wife, but after five years of marriage, she remains childless while Harry is increasingly remote and distracted. Despite lavish parties at the Manor and the Yacht Club, Bea is lost and lonely and befriends the manor’s laundress, whose work ethic and family life stir memories of who she once was.

As she drifts further from the society women and their preoccupations and closer toward Montauk’s natural beauty and community spirit, Bea finds herself drawn to a man nothing like her husband - stoic, plainspoken, and enigmatic. Inspiring a strength and courage she had almost forgotten, his presence forces her to face a haunting tragedy of her past and question her future.

Desperate to embrace moments of happiness, no matter how fleeting, she soon discovers that such moments may be all she has, when fates conspire to tear her world apart....

What listeners say about Montauk

This was the perfect kick off to summer reading/listening. Light and upbeat but, not so much that I lost interest. Couldn’t stop listening and finished in 2 days!

This book left me feeling like a got a scoop of vanilla ice cream with some freezer burn when what I wanted was a brownie hot fudge sundae. It was ok, but left me regretting I finished it. This was our bookclub pick and one of my friends, who loved it, said it was the “mindless distraction we all need right now.” My reply to that is, “Tiger King is the mindless distraction we all need.” The narration is as good as it gets. The story is filled with one dimensional supporting characters. You are either angel or devil. The author keeps drilling into you which side of the good/bad line they reside. There are attempts that the author makes to develop a couple characters but it did nothing for me. In the end if you were the hard working scrabbling to get by you’re all good. If you’re financially successful you’re all bad. Unless you’re a successful hat maker, then you’re good. The book was predictable. The end was a cop out. I write this review for all those seeing the stellar reviews and are scratching their heads. You are not alone. I want to help validate your experience. This was eh...not a total waste of fourteen hours but close to it.

A haunting novel that will stay with me forever

I don't know if I can actually convey all of my feelings about Montauk by Nicola Harrison, but I can say WOW, this is an incredibly memorable and smashing debut novel for this author. I listened to the book almost fully on audio and I loved it, the narrator Erin Bennett was quite fantastic, especially on 2x speed! She made the perfect narrator for this novel and brought the story and book to life for me. Montauk is basically a character in itself and I loved learning more about what it was like in the late 30s. The setting was so vivid and the characters so real, I almost felt like I was right there with them. I loved Dolly and Beatrice the most, but there were plenty of characters to both love and hate. In the nature of full disclose, I actually picked Montauk up and had started it but even though I liked it, I knew it just wasn't the right time to read it. I am so glad I picked it back up when I did and went with the audio the second time around. I ended up loving it and I'm happy I didn't try to finish it when I wasn't in the mood for it. This is a highly atmospheric, historical fiction novel with romance so make sure you are ready for that when/if you read it. Montauk made my heart hurt, and even though I didn't full on cry during it, there were definitely plenty of moments that brought tears to my eyes. Overall I think it was a quick read although I highly recommend going the audio route since the narrator was so good. I listened to it on Audible and there was an interview with the author at the end which just made me love the book even more. Song/s the book brought to mind: Again and Again by Jewel Final Thought: Montauk is a beautifully written novel and I am seriously impressed it is a debut. Harrison did a great job of bringing the location to life, and the plot had many layers which I enjoyed. The romance, tragedy, and fashion in Montauk all came together for me and I won't be forgetting this one any time soon.

It was beautifully narrated by Erin , loved her voice Really brought Montauk to life a place in which I spent many summers The historical aspect I really enjoyed The story at times was a bit too cheesy for me , but none the less it was a lovely light summer read ❣️

I finished Montauk yesterday but feel as though I'm still living in the summer of 1938 in the town and beaches of Montauck. The contrast of the very wealthy of that era with the villagers in the fishing village who work and serve the wealthy during the summer totally captured my imagination. Everything I love in a book, great storyline, perfect balance between description and dialogue, great character development, and perfect narration. I found myself using every free minute to indulge myself in listening to the story of Beatrice, John, Elizabeth, Dolly, and who can forget Jeanie!? Mean Girl...1938 style!. I had a running movie in my head as the narrator read with just the right expression. I wasn't thrilled with the voice she used for John but everything else was perfection. I hope the author will write a sequel! I am so invested in these characters I want to know what happens in their lives going forward.

Nicola totally hooked me. Fasted I have ever listened to an audiobook story. Had to force myself to take breaks to carry on with my daily agenda! Fortunately, I was driving a lot so had plenty of time to listen! I was totally entrenched in the story from the beginning. Author did a wonderful job at bringing the characters to life and narrator did a lovely job with different inflection for the various personalities. It felt as if I was there, watching it all! PS LOVE Dolly!

The main character in this book (Beatrice) seems to just float along from one circumstance to another. This is difficult to put into words. She reminds me of the type of character you find in a Theodore Dreiser novel (e.g., Sister Carrie or Jennie Gerhardt) - but her character is not built out in the same way. She comes off as either stupid or just not "all there." Despite all her advantages, she approaches life as a victim. This sounds harsh - and it would be if the book weren't pretending to be a work of art or, at least, something more substantive than a drawn-out story. There is one excellent feature of the book: the society women (or traditional Greek chorus) are very well portrayed. Each has clear features and attitudes that add perspective about "high" society of the time. Erin Bennett is one of my favorite readers. However, the lackluster character gave her no opportunity to really shine. I am sorry I didn't stop reading this book half-way through. I was just sure it had to get better.

I liked this historical fiction story set in Montauk, New York with the hurricane of 1938. Erin reading was on point. It did have a mix of the well to do and the locals for an interesting listen. The ending was a surprise! I think Nicole Harrison did a great job on her first book and I hope she will write part 2 to finish off things left undone.

The positives - great narration, lovely cover art, and a promising set up, a lifestyle of the rich and famous in Montauk, NY, 1938. The negatives - cardboard characters, a sappy romance, and a totally predictable plot. I could tell where the author was going and I wanted to cry No, don't go there ! But she did.....and ruined the book.

The setting is gorgeous, the time period is fascinating, and the fashions of the New York elite are dramatic. However, there are so many threads that never get tied up in this story. There's an arch enemy but never a scene to put her in her place, there's a marriage gone wrong but never remorse or alternatively retribution, there's a secret career for the main character but it ultimately has no lasting impact and only serves as a distraction, there's a wiser, older, irreverent friend who starts strong but loses her edge as the story progresses. I was along for the ride until the end, hoping that the ending would move it from pretty good to great, but the clever or imaginative resolution I was hoping for never happened. I don't require a fairy tale ending, but this ending felt lazy and made me wonder if I had wasted my time.