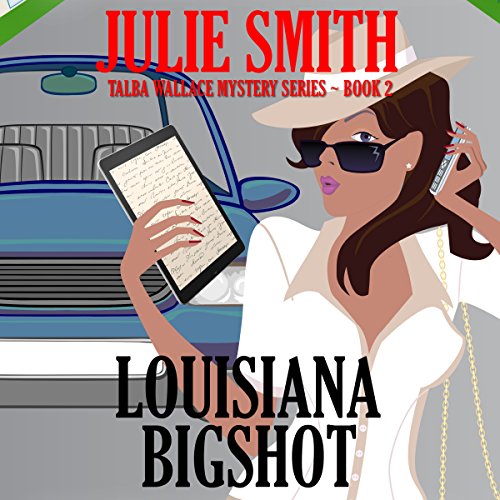 Meet the hottest detective duo in New Orleans - she's Queen Latifah. He's Danny DeVito. Or they would be if this were a movie - in print, they're Talba Wallis and Eddie Valentino. Talba's got the beauty, the brains, the computer savvy, the poetic soul, the youth, the right demographic, and the sass. Eddie's got the detective agency. Also a short fuse and yes, wisdom. Not only do they make it work, they've got chemistry.

And they need every skill and ounce of courage they can summon in this intricate tale of a decades-old conspiracy only now coming home to roost, with the murder of Talba's friend Babalu Maya. Babalu is actually Clayton Robineau, daughter of the local banker in a small Louisiana town that bears her name, a town buried under the weight of its own malevolent past.

Something terrible happened to Clayton as a child, but it was far from the usual "something terrible". As Talba and Eddie investigate, they find it was an injury - both psychic and physical - so bizarre, so shameful and damning that almost anyone in town would kill to cover it up. Or so it seems to the New Orleans duo as they dodge bullets and what passes for the law in this malignant enclave, fetid with the rot of its corruption, yet determined to keep its sordid skeletons buried.

Never did Faulkner's words ring so true as in Clayton, Louisiana: "The past is never dead. It's not even past."

What listeners say about Louisiana Bigshot

Loved this series from the start. Enjoyed the first one and then got this one and I think I enjoyed it more. But they were both very good books.

She has away with words. a great story teller. Grabs your attention and keeps to the end. Making you want more.

This is what I consider a fun read. Nothing too deep and profound, not especially thrilling or amazing, but it was a good story to pass the time and brought a few smiles along the way. Talba Wallis is an up and coming PI with a smattering of skills and a lot of determination. She is smart, but a little "too much" for some of her circumstances. The description of her as a "Queen Latifah" type is pretty spot on. I can see the Queen handling the role very well.

The plot revolves around a layered series of events that begins with the death of Talba's friend, but just keeps getting deeper and deeper. Although race is not a factor in the story, it is. Talba is black and her friend was white. And her friend was from a VERY white part of Louisiana, where Talba cannot blend in, and therefore cannot truly investigate they way she has been taught in the heart of New Orleans, where races blend and meld together. But as I said, Talba is smart. She'll figure it out.

About the narration for this book, though, I have some reservations. For me, a story told from the perspective of a young black woman from New Orleans should "sound" like a story told by a young black woman from New Orleans. Nan McNamara sounds so bleach blonde bob-tailed, cookie cutter white that it was more of a distraction to the story. I wanted to hear "Talba" but I just couldn't. And don't even get me started on her attempts at the voice of Eddie Valentino, who should have been a New Jersey, nasaly old white man, but again, you've got the bleach blonde cookie. "His" use of "Ms. Wallis" made me cringe every time. If you can get past that (and I only barely could), it's a relatively well-written detective novel about a young detective who is just learning her way and who does make mistakes, sometimes rather pricey ones.

I may check this author again sometime, but for the character Talba Wallis, I should think there could be a better voice.

This has really been a fun read. It has been a while since I've read anything by Julie Smith. I't