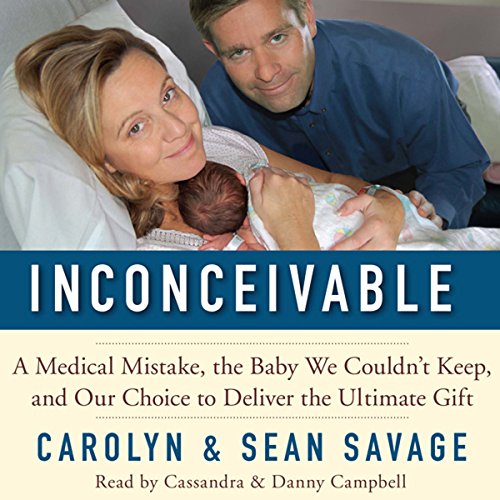 A medical mistake during an IVF procedure.An unthinkable situation....you're pregnant with the wrong baby. You can terminate, but you can't keep him. What choice would you make?

Carolyn and Sean Savage had been trying to expand their family for years. When they underwent an IVF transfer in February 2009, they knew it would be their last chance. If they became pregnant, they would celebratethe baby as an answer to their prayers. If not,they would be grateful for the family they hadand leave their fertility struggles behind forever.

They never imagined a third option. The pregnancy test was positive, but the clinic had transferred the wrong embryos. Carolyn was pregnant with someone else's baby.

The Savages faced a series of heartbreaking decisions: terminate the pregnancy, sue for custody, or hand over the infant to his genetic parents upon delivery. Knowing that Carolyn was carrying another couple's hope for a baby, the Savages wanted to do what they prayed the other family would do for them if the situation was reversed. Sean and Carolyn Savage decided to give the ultimate gift, the gift of life, to a family they didn't know, no strings attached.

Inconceivable provides an inside look at how modern medicine, which creates miracles daily ,could allow such a tragic mistake, and the many legal ramifications that ensued with both the genetic family and the clinic. Chronicling their tumultuous pregnancy and its aftermath, which tested the Savage's faith, their relationship to their church, and their marriage, Inconceivable isultimately a testament to love. Carolyn and Sean loved this baby, making it impossible for them to imagine how they could give him life and then give him away.

In the end, Inconceivable is a story of what itis to be a parent, someone who nurtures a life, protects a soul, only to release that child into theworld long before you're ready to let him go.

What listeners say about Inconceivable

This is such a awesome story. To think that there are still prople in the world that are so selfless. LOVED IT!!!!

What a story. What a wonderful family the Savages are. My heart breaks for their pain, but they did such a wonderful thing by giving birth to Logan and understanding and accepting that he belonged with his genetic family. Such hardship. Very inspiring read.

This is the true story of how one couple’s frozen embryos were mistakenly implanted into another woman during IVF treatments. What an unbelievable nightmare!

I read both books back to back and I would recommend that anyone interested in this fascinating story do the same. Their accounts are riveting and hearing the same story from both camps is engrossing. Emotions really do colour people’s recollection of shared events and this is proof of that fact!

It’s an awful situation for everyone involved, but having read both books, in my personal opinion I am left with more compassion for the woman who carried the baby and had to ultimately give it up than I did for the biological mother… but Lord only knows how I would feel if I was ever in their shoes!

This book is beautifully written. It's a story of love and sacrifice. As soon as I finished this one I got Misconception. Must read them both.

Yes....it was a very insightful read

The lady who was implanted with another's embryo

At the birth of the baby

When they chose to keep the pregnancy

One of the best books I have listened !

I loved this book because it happened to "real" people. I have read true stories where the people seemed to be saints and if you believe in God, everything will be easy. This is not one of those books. This family believed in God and did what they believed to be the right thing- but it was not the easy thing. They suffered real emotions... They were angry, they felt hatred and a variety of other human emotions that humans feel. They leaned on their faith in God to help them through, but it didn't make them less human. It is a wonderful book that will renew your faith in the human race.

what an amazing book , how this famaly managed to do that is beyond me , and now aftre all the pain they went through they now have twin girls , im so happy for them , what a truly amazing family