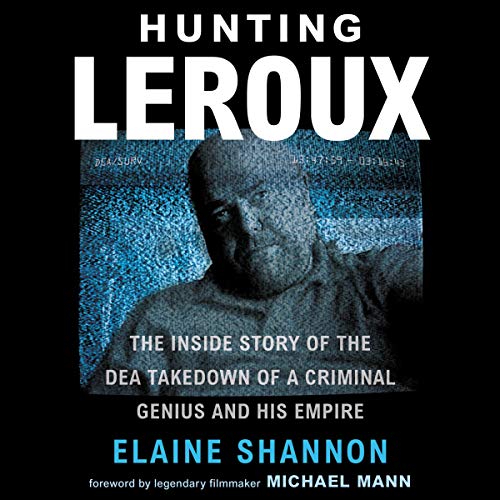 With an introduction by four-time Oscar-nominated filmmaker Michael Mann.

The story of Paul LeRoux, the twisted genius entrepreneur and cold-blooded killer who brought revolutionary innovation to international crime, and the exclusive inside story of how the DEA’s elite, secretive 960 Group brought him down.

Paul LeRoux was born in Zimbabwe and raised in South Africa. After a first career as a pioneering cybersecurity entrepreneur, he plunged into the dark side, using his extraordinary talents to develop a disruptive new business model for transnational organized crime. Along the way, he created a mercenary force of ex-US and NATO sharpshooters to carry out contract murders for his own pleasure and profit. The criminal empire he built was Cartel 4.0, utilizing the gig economy and the tools of the digital age: encrypted mobile devices, cloud sharing, and novel money-laundering techniques. LeRoux’s businesses, cyber-linked by his own dark worldwide web, stretched from Southeast Asia across the Middle East and Africa to Brazil; they generated hundreds of millions of dollars in sales of arms, drugs, chemicals, bombs, missile technology, and murder. He dealt with rogue nations - Iran and North Korea - as well as the Chinese Triads, Somali pirates, Serb mafia, outlaw bikers, militants, corrupt African and Asian officials, and coup-plotters.

Initially, LeRoux appeared as a ghost image on law enforcement and intelligence radar, an inexplicable presence in the middle of a variety of criminal endeavors. He was Netflix to Blockbuster, Spotify to Tower Records. A bold disruptor, his methods brought international crime into the age of innovation, making his operations barely detectable and LeRoux nearly invisible. But he gained the attention of a small band of bold, unorthodox DEA agents, whose brief was tracking down drug- and arms-trafficking kingpins who contributed to war and global instability. The 960 Group, an element of the DEA’s Special Operations Division, had launched some of the most complex, coordinated, and dangerous operations in the agency’s history. They used unorthodox methods and undercover informants to penetrate LeRoux’s inner circle and bring him down.

For five years, Elaine Shannon immersed herself in LeRoux’s shadowy world. She gained exclusive access to the agents and players, including undercover operatives who looked LeRoux in the eye on a daily basis. Shannon takes us on a shocking tour of this dark frontier, going deep into the operations and the mind of a singularly visionary and frightening figure - Escobar and Victor Bout and Jeff Bezos rolled into one.

Hunting LeRoux introduces a new breed of criminal spawned by the savage, greed-exalting underside of the age of innovation - and a new kind of true-crime story. It is a look into the future - a future that is dark.

What listeners say about Hunting LeRoux

There’s two books doing the rounds about Le roux at present. The other is by Evan Ratliff. I would recommend that work above this. In the closing credits, Shannon states this book took six years and thousands of interviews to compile. I wonder if those six years could have been better spent. Very little time is devoted to discussing how Le roux came to be in the position of power he was in when he truly dedicated himself to criminal misdeeds. There’s a lot to be learnt about Le roux and his criminal empire from the formation of Rx limited. There is even more to be learnt about Le roux from his early days of tech work. There’s a pivotal moment in Le rouxs life in his early tech days where he decides to stop being screwed over and start becoming a powerful figure. None of this is present in this book which is really disappointing because it is very informative in the process of Le rouxs evolution to a criminal mastermind. Perhaps I missed the point of this book but this is important information. Had I not read Ratliff’s book I would not have known it.

Great true crime story. very detailed but not boring. why does this need x words

Good overall. Kind of a weird set-up : bunch of guys get arrested at the start and then their story is told later. Interesting topic but too heavy on the police investigation instead of the criminals antics.

I stopped listening after an hour.

The narrator read far to quickly and had a droning voice. The story jumped all over the place and rambled, I didn’t have a clue what was happening.