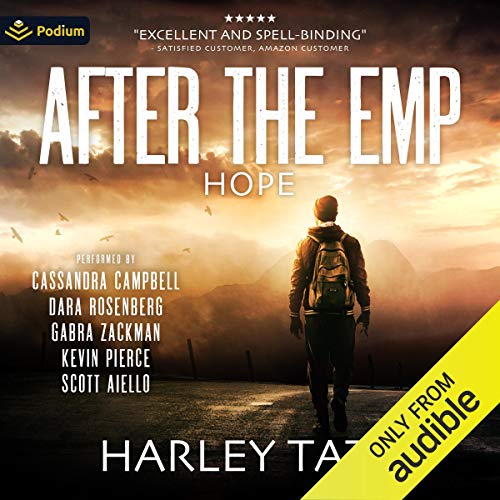 Hope: After the EMP, Part III

Six weeks into the apocalypse, would you have hope?

From an emergency landing, to a full-blown riot, to a militia gone rogue, Colt and Walter have survived it all. Joining forces, their group heads toward Walter’s cabin and the promise of a new life. But mother nature has other plans.

After the EMP is post-apocalyptic thriller series following ordinary people trying to survive after a geomagnetic storm destroys the nation’s power grid.

What listeners say about Hope: After the EMP, Part III

I wanted to read through to the end. A mistake. Aimless, meandering, lazy writing with no point or purpose.

will miss this series.

narrator's were all amazing. Author is very good at binging you in the story. very well written.

We were sad when this series ended...

Both my hubby and Ioved this book. It kept us enthralled until the very end.

I like these books. I think Tate does great with this series. I hope it continues on and maybe some knew characters com into the picture. I also like the use of multiple narrators.

I can't even keep track of which character or what's going on. Ruined the book.