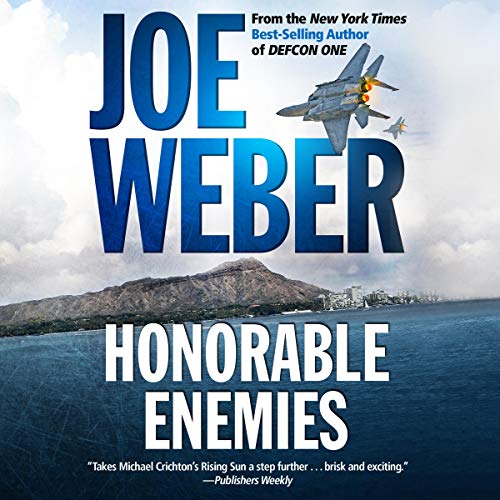 The beautiful tranquility of the Hawaiian afternoon is shattered when a cruise ship filled with Japanese tourists is comes under fire. Unbelievably, a civilian helicopter is strafing the ship with automatic weapons.

The shock waves from the tragic attack reach all the way to Washington and Tokyo. In retaliation for the attack, a group of American tourists is ambushed in Osaka, and then Japanese-Americans become targets across the United States. Relations between the U.S. and Japan rapidly deteriorate.

The only way to restore order and prevent a greater conflict is to find out who is responsible for the initial attack - and why. This task is assigned to senior CIA operations officer Stephen Wickham and a Japanese-American FBI agent, Susan Nakamura. Their search leads them to a deadly conspiracy of enormous proportions...and reaching all the way to the highest levels of the U.S. and Japanese governments.

In Honorable Enemies, Joe Weber has formulated a chilling post-Cold War scenario, once again proving himself a master at portraying a frighteningly real near-future confrontation with our most powerful rival - Japan.

"Some writers get better with age: Weber is among them." (Library Journal)

What listeners say about Honorable Enemies

I have literally listened to hundreds of audiobooks on the service over the years. This has to be one of the worst narrators I’ve ever heard. The narrator sounds robotic and reads faster and slower, to say nothing of the horrible borderline insulting accents.

Even for an action adventure, what if scenario book the story and characters are under developed, unbelievable and not very interesting.

I’m about halfway through this book and I don’t think I’m even going to finish it and couldn’t care less about the story. Definitely pass on this one.