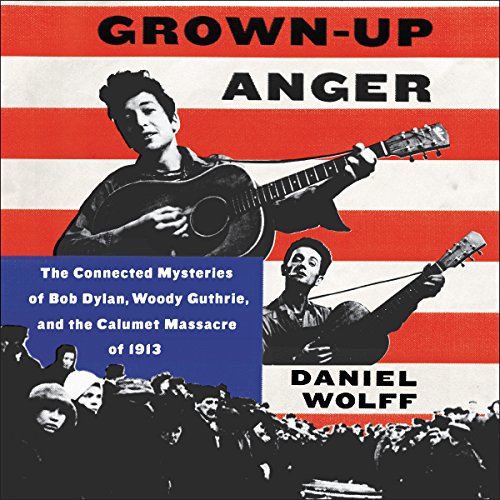 A tour de force of storytelling years in the making: a dual biography of two of the greatest songwriters, Bob Dylan and Woody Guthrie, that is also a murder mystery and a history of labor relations and socialism, big business and greed in 20th-century America - woven together in one epic saga that holds meaning for all working Americans today.

When 13-year-old Daniel Wolff first heard Bob Dylan's "Like a Rolling Stone", it ignited a lifelong interest in understanding the rock poet's anger. When he later discovered "Song to Woody", Dylan's tribute to his hero, Woody Guthrie, Wolff believed he'd uncovered one source of Dylan's rage. Sifting through Guthrie's recordings, Wolff found "1913 Massacre" - a song that told the story of a union Christmas party during a strike in Calumet, Michigan, in 1913 that ended in horrific tragedy.

Following the trail from Dylan to Guthrie to an event that claimed the lives of 74 men, women, and children a century ago, Wolff found himself tracing the history of an anger that has been passed down for decades. From America's early industrialized days, an epic battle to determine the country's direction has been waged, pitting bosses against workers and big business against the labor movement. In Guthrie's eyes the owners ultimately won; the 1913 Michigan tragedy was just one example of a larger lost history purposely distorted and buried in time.

In this magnificent cultural study, Wolff braids three disparate strands - Calumet, Guthrie, and Dylan - together to create a devastating revisionist history of 20th-century America. Grown-Up Anger chronicles the struggles between the haves and have-nots, the impact changing labor relations had on industrial America, and the way two musicians used their fury to illuminate economic injustice and inspire change.

What listeners say about Grown-Up Anger

There is a reasonable balance of coverage between the two musicians (and their contemporaries) and labor history. The latter coverage is done the best and the most interesting.

It holds and keeps your interest through out the book. It combines history with two very interesting bios.

Beautifully told story of AmericA & it's favorite sons as they exist from above; to the ground on down.

This is a nicely written and well researched history of a sadly neglected event, the 1913 Massacre. It does a good job of connecting the dots from Calumet to Guthrie to Dylan.

Fascinating weaving together of the story of American copper miners, Woody Guthrie's life and the early career of Bov Dylan.

Gave me an entirely new perspective to appreciate Woody Guthrie's lyrics from, and had me listening to Dylan's "Song to Woody" on repeat for days...

After setting the context of North American labour unions, Guthrie's struggles and Dylan's ambitions the chapter analysing the lyrics of "Like A Rolling Stone" alone makes the entire book worth purchasing and reading.

No. The author has an obvious disdain for for both men, it shows through clearly. With part fact, part fiction, lies, and a very hypocritical starch shirt interpretation. It is however amusing that in the same sentence of being critical about the singers interpretations, he uses his own far flung interpretations.

A better book, with FACTS, about Dylan and or Guthrie.

It is hard to have a favorite, I couldn't tell the difference between fact and fiction. The whole book was a joke.

Was Grown-up Anger worth the listening time?

Be very careful of what you listen to, and what you take as truth. The author took way too many liberties, while contradicting both singers for their own. A complete joke and a waste of time.

I would have liked for the the story to have been more interwoven (if it had actually been, that is). As it was, there were three distinct stories, Dylan, Guthrie and the Calumet Massacre. While it finally attempted to tie everything together near the end, the thread of organized labor history wore a bit thin at times.

What was one of the most memorable moments of Grown-up Anger?

On the other hand, the (nearly) verbatim recitations of Dylan lyrics, seemed a bit overdone. Even as I am a huge fan of Dylan's music, the author's style of mixing between quotes and summary was tiresome, and seemed only to assert the his Dylan bona fides, and to fill pages (and audiobook time).

What does Dennis Boutsikaris bring to the story that you wouldn’t experience if you just read the book?

He gave a good reading, with seemingly appropriate intonation. However, the times he read "....maybe", while accurately expressed, became a bit irritating. But that's down to the author.

I'm not sure there's enough "there" there, for a movie. Certainly all three subjects are deserving, and have been covered to varying degrees. I'm sure a film focusing on the 1913 Calumet Massacre could rely heavily on a Guthrie/Dylan soundtrack, though. And I would go to see it.

Though a lot of my comments seem negative, I actually did enjoy the the book. The negative points (.... maybe.) became irritants, but once it became clear that there really wasn't all that much of a connection, and most the "mysteries" were just of the "Bob being Bob" variety, I could enjoy each part individually.