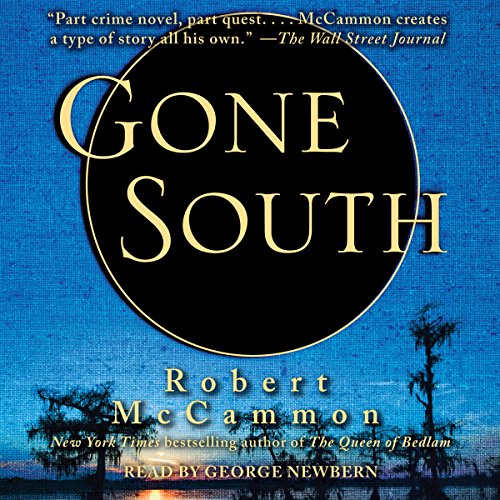 It was hell's season, and the air smelled of burning children.... With "one of the most arresting first sentences in contemporary writing" (The Atlanta Journal-Constitution), Robert McCammon unfurls his visionary masterpiece of survival, redemption, and the astonishing transformations love can create. Gone South chronicles a desperate man's journey through a desperate land, in "a gothic picaresque that mixes gritty plot and black comedy...a smoothly constructed and satisfying story" (The Wall Street Journal ). Flooded by memories, poisoned by Agent Orange, Dan Lambert kills a man in a moment of fear and fury - and changes his life forever.

Pursued by police and bounty hunters, Dan flees south toward the Louisiana bayous. In the swamplands he meets Arden Halliday, a young woman who bears the vivid burdens of her own past, and who is searching for a legendary faith healer called the Bright Girl. Looking for simple kindness in a world that rarely shows it, bound by a loyalty stronger than love, Dan and Arden set off on a journey of relentless suspense and impassioned discovery...over dark, twisting waterways into the mysterious depths of the human heart.

Wonderful writing and a great performance

What did you love best about Gone South?

The writing was a breath of fresh air. I've had a run of real duds in the last six months. It was great to listen to Robert McCammon's writing. His characters are very believable, even the odd ones.

Amazing. I would say he's as good as Edoardo Ballerini from the Mathew Corbett books.

A great story by Robert McCammon. The book has sympathetic characters, some oddities, a road trip searching for a miracle healer, and an uplifting ending. McCammon writes great dialogue, too, and the prose is so discriptive that I felt the heat and humidity of the swamps and bayous. Excellent narration by George Newbern.

a departure from his horror and historic fiction novels. a story of redemption. Great read.

I started reading Robert McCammon by beginning the Matthew Corbett series and was hooked. Looking for another book by him I thought I'd give this a chance, I was not disappointed! I think I will continue reading more books by this author, I love the writing style, the stories, and the characters he invents. This book follows a man on the run and chronicles his journey, turning into a vehicle for the book's other character, Arden. She is seeking a faith healer deep in the Louisiana bayou. Cynical of her belief but obliged to accompany her, Dan Lambert agrees to take her to a town close by a hideout he plans to lay low in. But two bounty hunters, seeking the $15,000 reward for Lambert follow him and waylay his plans--attracting the attention of even more unscrupulous characters trafficking drugs. What ensues is a dark but humorous adventure for Lambert and Arden, on the run but never seeming to shake the persistent hunters. The characters aren't static, part of what I loved about the story was how they change by the end of the book, their preconceptions challenged and left questioning--leaving for a very satisfying ending.

The story was surprising at every turn. Heroes and anti-heroes that had me cheering and giggling the entire time! It's a great escape, a strange and believable world. Intelligent literary parallels but entirely entertaining. I loved this book!

Vietnam vet in trouble seeking redemption is tracked by a former carnival freak and an Elvis impersonator with a dog named Momma, joined by a woman with a huge port stain birthmark. What’s not to love?

I really enjoyed this book ,almost as much as his other book , Boy's Life, which by the way was a wonderful book too.

Robert McCammon makes the best stories. So many twists and turns and wild characters. I love all of Mr. McCammon’s books because of his fascinating stories.

Rich character development and a wealth of mini-sagas in unabridged. One of my McCammon absolute favourites. Touching, funny, lots of totally original stuffe here!