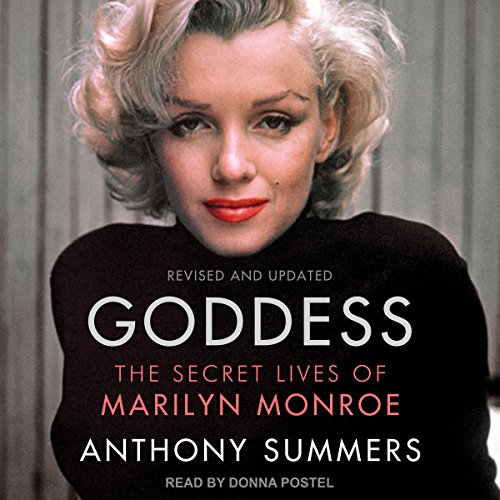 Marilyn Monroe, born to deprivation and a series of foster homes, became an acting legend of the 20th century. She married famous men, Joe DiMaggio and playwright Arthur Miller, and her many lovers included President John F. Kennedy. Her death, at 36, is a mystery that remains unsolved to this day.

Anthony Summers interviewed 600 people for this book, which reveals unknown truths, some funny, some very sad, about this brilliant but troubled woman. First to gain access to the files of Monroe's last psychiatrist, he throws light on Monroe's troubled psyche and her addiction to medications. He establishes once and for all that she was intimately involved with John and Robert Kennedy, who probably covered up the circumstances of her death.

“A remarkable performance…. The ghost of Marilyn Monroe cries out in these pages." ( New York Times)

What listeners say about Goddess

This is an appallingly misogynistic book. The hateful, unsympathetic tone is sickening. Having read many Monroe biographies, this is the worst.

The first half is okay but the second half that gets into the complicated relationships between Marilyn and the Kennedy brothers, Peter Lawford, Frank Sinatra, and Sam Giancona of the mafia is really good. The most telling Marilyn quote is about being passed around like a piece of meat, and clearly that is how these 5 womanizing jerks thought of her.

This is a very well researched and balanced look into the life of a beautiful but deeply damaged woman. It's so easy for us mere mortals to forget that great beauty can be a trap, but she was no easy victim either. Used badly by the Big Studio contract system, she later became one the first women to start her own production company and played contract negotiations cunningly. Looking for love in all the wrong places, but not valuing it when she found it. Desperate for children, yet having many abortions. Working out constantly and careful with her diet, yet abusing prescription drugs. Compartmentalizing her life so that her closest associates had no idea what was really going on in her life, yet carelessly indiscreet. This was a very complicated woman who interacted with some of the most powerful men in the US, yet was either rediculously naieve or downright delusional.

Fascinating, disturbing, but I couldn't put it down. Finally, the author's conclusions about what likely happened the night she died is the most probable of all the versions I've seen. The last chapter contains updates on the latest bits of information that have become available after the original publication.

I always knew the basics of the background of this beautiful woman, however, after listening to this book, my heart really went out to her. Yes, she was an alcoholic, and drug addict, but there was so much more to this woman. She didn't have a chance from the day she came to Hollywood. Yes, you might say everyone that goes there should expect what they get, but her problems started way before she got there. Besides that, this book sheds light into just how much of a lonely, insecure, and horribly used person she was. By the Kennedy's, and several others. Once you listen to this, you'll realize.... she didn't even have a chance....

Horrible Point of view and I think and what I got from it was clearly insulting towards Marilyn Monroe.

Prurient account of Marilyn Monroe's life - and death. read another's biography for factual reconstruction of both.

Very well researched and fair. She was many things ...I'm glad she lived then because of she lived today the aggressive tabloid practices would have ruined her even sooner. It was very interesting to learn about the people in her life. DiMaggio loved her to the end.

Few faces are as iconic as that of Norma Jeane Mortenson, also known as Marilyn Monroe. Author Anthony Summers presents her as a smart and talented woman, who succeeded professionally, but remained emotionally dependent to powerful men. Monroe never knew who her father was. Her relationship with her mother was complicated, as the latter gave her away to foster parents and years later was interned in a hospital and diagnosed with schizophrenia. Monroe spent time at an orphanage and at several different homes. She was sexually abused at a young age. During her teens, she became a model and began pursuing a career in entertainment, eventually turning into one of Hollywood's biggest stars. She played a "dumb blonde" in hits like 'Some Like It Hot' and 'The Seven Year Itch'", but this biography suggests that there was much more to her than that. Monroe married three times, first when she had just turned 16, in order to avoid having to return to an orphanage. She found that relationship unfulfilling and divorced. Years later, she went on to marry two celebrities, baseball superstar Joe DiMaggio and author Arthur Miller. Summers describes her in essence as the kind of woman that many wanted to possess, but few understood, even when there was love involved. He writes in detail about her sexual and emotional life, and her affairs with a series of different men, including both President John F. Kennedy and his brother Robert, whom he ties to her death, controversially. Although 'Goddess' is well written and informative, some may recoil from its more salacious gossip. Others may deem the grave accusations against the Kennedy brothers irresponsible. It's impossible for me to judge whether Summers' theories are true or false, but I understand from articles that I've read that his allegations were taken seriously when the book was published. I wouldn't be too surprised if they were accurate. Perhaps it's all speculation. All in all, this audiobook allowed me to get a better sense of who Marilyn Monroe was as a person. I do think that Summers' attitude towards her is ultimately sympathetic, despite the sensationalist elements of his work. Donna Postel is a skilled narrator, who can imitate Monroe well. Her tone of voice has a touch of tabloid flavor that matches certain aspects of the content, but doesn't necessarily elevate it. She's really great, but I do wonder whether a more sober reading may have worked better.

I really liked this book and I feel better informed about Marilyn, her situation, and the times she lived in. I would like to thank the author for the excellent and thorough citations for this book. The narrator did a fantastic job. I love the "voice " she used for Marilyn. It's exactly how I pictured her. Bravo.

I learned a lot from this book. It gives you different perspectives on Marilyn Monroe, AKA Norma Jeane. the Narrator was really good.

I love reading anything about Marilyn and her extraordinary life. It's not as packed with detail as some Marilyn books.

The definite book on Marilyn Monroe

This is genuinely the only book you’ll ever need to read or listen to on the icon. It covers her early life and later years in great detail and has been updated since publication to reflect the recent (at the time) news items about her. It flew by.

Anthony Summers is by far the best investigative biographer - he leaves no stone unturned in the story of Marilyn. I bought the original book in 1986 and this version jettisons the tragedy bang up to date! Why this icon has not received justice is a disgrace and the new information points the destruction of her in only one direction. I hope that when Judith Campbell’s files became public in 2025, the authorities have a fresh investigation. An absolutely brilliant biography dedicated to finding out the truth.

Wonderful in most times, but gets carried away...

I find most of it a fascinating story of an insecure and fragile human being behind the most iconic symbol of the last century. Very well researched and nicely told. Gets carried away at the end with the cause of death, in few details even contradicts itself...