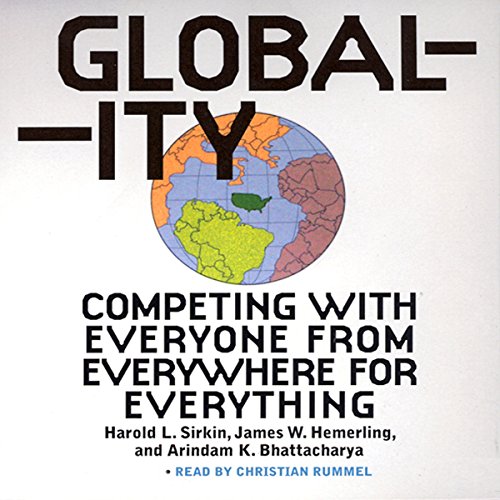 An absolutely stunning - and scary - wake-up call that reveals how the economic world is about to change dramatically in the next few years as dozens of RDEs (Rapidly Developing Economies) begin to assert themselves as major economic powers. Globalization is about Americans outsourcing product development and services to other countries.

Globality is the next step, where rapidly developing economies from around the world are now competing with us head to head. The authors present a strong case that the economic climate in which we have lived is going to change in unprecedented ways.

"Many American chief executives, it turns out, are aiming at emerging markets...And they will find many insights into prevailing in those battles in this book." (William J. Holstein of the New York Times)

"...for any corporate strategist pondering the challenges and opportunities of globalization, this book is an indispensable guide." (John Cummings of Business Finance)

"While the global economy has been a hot topic for at least two decades, it is in constant need of updating...GLOBALITY...does the job nicely." (BNET)

"[This] vividly detailed tome describes the latest shift in globalization from a one-way street of Western domination to an increasingly competitive global playing field, where businesses from once-discounted nations are solidifying their standing." (CIO Insight)

"Whatever the next New World Order turns out to be, the advice in GLOBALITY will come in useful, for multinationals and individual workers alike." (Business Pundit)

"A smart discourse on how local companies in developing economies, such as China, India and Brazil, are bucking tradition and going for broke on their own terms..." (BNET)

"This book is a must-read for leaders of companies in the developed world who want to get into the globality act and stay in it." (Cecil Johnson, McClatchy-Tribune News)

"Get ready for a new wave of challengers, 'bursting their way onto the big stage.' So say the three authors of this smart analysis about the latest developments in global competition" (Andrea Sachs of Time)

What listeners say about Globality

Good book. Concepts are there and the conclusions are interesting. But, the 1st half is a "world is flat" summary. It takes until hour 3 before the real ideas come to a fruition.