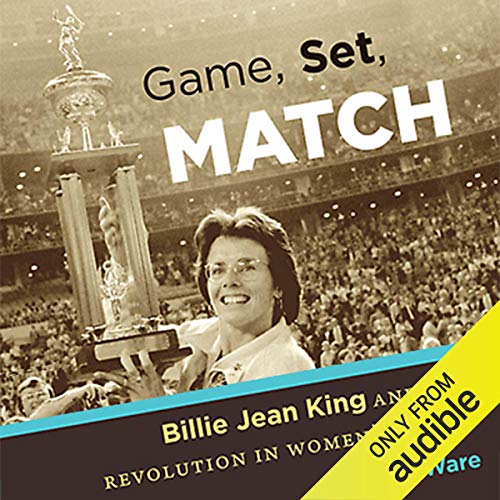 When Billie Jean King trounced Bobby Riggs in tennis's Battle of the Sexes in 1973, she placed sports squarely at the center of a national debate about gender equity. In this winning combination of biography and history, Susan Ware argues that King's challenge to sexism, the supportive climate of second-wave feminism, and the legislative clout of Title IX sparked a women's sports revolution in the 1970s that fundamentally reshaped American society.

While King did not single-handedly cause the revolution in women's sports, she quickly became one of its most enduring symbols, as did Title IX, a federal law that was initially passed in 1972 to attack sex discrimination in educational institutions but had its greatest impact by opening opportunities for women in sports.

King's place in tennis history is secure, and now, with Game, Set, Match, she can take her rightful place as a key player in the history of feminism as well. By linking the stories of King and Title IX, Ware explains why women's sports took off in the 1970s and demonstrates how giving women a sporting chance has permanently changed American life on and off the playing field.

The Woman, The Game, The Revolution

This is one of those books about a legend—the whole time you’re reading it you’re thinking, “Wow, Billie Jean is AWESOME.”

"Game, Set, Match" is a biography about Billie Jean King, the woman who "made" women’s tennis, and helped bring the world’s attention to women’s sports.

She was also a closeted lesbian for a long time, and then later came out, before it was the least bit fashionable. Balls!

A great under-dog story, fantastic build up, with a satisfying ending.

Narrated by Donna Postel, who voices another of my favorite books, "The Ultimate Guide to Sex and Disability."