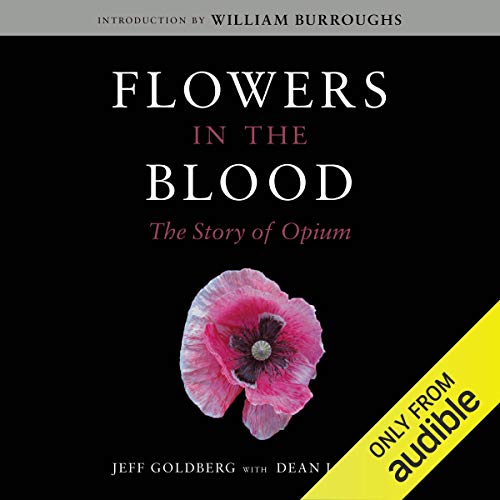 Flowers in the Blood

The incredible and complex history of opium throughout the world.

Opium has played a dramatic and varied role in human history, inspiring religious veneration, scientific exploration, the bitterest rancor, and the most fanciful ecstasy. Now, authors Jeff Goldberg and Dean Latimer have provided a complete, insightful history of opium. Flowers in the Blood lifts the veil of mystery that has surrounded opium down through the ages.

Along the way, the authors provide details of the addictions of S. T. Coleridge, Thomas De Quincey, and other literary opium-eaters of the nineteenth century, as well as chronicling the progress of antidrug laws and the ongoing search for an addiction cure.

Originally published in 1981, this edition of Flowers in the Blood has been updated with a new preface by Goldberg. At times disconcerting, raising serious questions about attitudes and approaches toward powerful drugs and their control, Flowers in the Blood is an essential addition to the literature of opium, and a wide-awake look at the stuff that dreams (and nightmares) are made of.

What listeners say about Flowers in the Blood

Published in 1981, “Flowers in the Blood” argues for decriminalization of opiates. The idea remains controversial in 2014. Written by Jeff Goldberg and Dean Latimer, a listener feels misdirected by historical information.

Goldberg and Latimer explain that punishing the addicted with prison is a mistake. Those who succumb to addiction need help; not punishment. One can readily accept that argument but opiate regulation by the government is a step too far. This may be a distinction without a difference but Alcohol and cigarettes are still a private sector choice with government intervention (principally tax increases and education) based on political input.

The loss of Philip Seymour Hoffman in February 2014 comes to mind. Hoffman dies at the age of 46, John Belushi at 33, Kurt Cobain at 27, Billie Holiday at 44, River Phoenix at 23; all from opiate overdoses. If opiates were legalized, would these artists have been saved—who knows? They chose addiction to escape the insecurity and stress of life. Their choice is their choice. Insecurity and stress are facts in every human’s life. America’s failure is related to treatment; not government control of human choice.

“Flowers in the Blood” fails to nuance legalization of opiates. It leans more toward influencing uneducated poor, educated middle class, and idle rich to experiment with addictive drugs.

This book might also be entitled 'History of the War on Drugs'. It's about legal and illegal drug trade, medically sanctioned drug use and recreational drug use.
Though the author details the politic and commercial circumstances that led to the opium wars in China in the 1800s he doesn't stop there. The book follows the opium trade through the 1960s, especially relevant in light of the current epidemic of new heroin addicts.
As successful traders have learned to repackage opium into more potent and more marketable morphine and heroin, science remains stymied in its attempt to understand and cure addiction.
The author takes us to opium dens in China, to respectable Victorian homes replete with Laudemun, to the fringes of modern urban America where addicts shiver under bridges.
He makes his point, addiction has remained constant and intractable, an old story with no end in sight.

What made the experience of listening to Flowers in the Blood the most enjoyable?

This deepened my knowledge of the oft- taboo subject of the opium poppy with its associated travails, successes against pain and sociological plunders across the ages. The author(s) weave a fascinating account of exactly how imbedded this uncommon flower and its byproducts have been in humanity's development, from Asia to Europe, and across the railroad-tracked plains of North America, then into our modern cities and ultimately into our legal system. The story seems to come to a halt in the 1970s, so in my view what is lacking is a chapter or two filling the audience in on developments into the 21st century.

What other book might you compare Flowers in the Blood to and why?

No- my emotions don't tend to run away when listening to historical, semi-scientific subject matters, though the book never ceased to be eminently entertaining.

Three cheers for an update to bring this landmark work up to the present year of 2014.