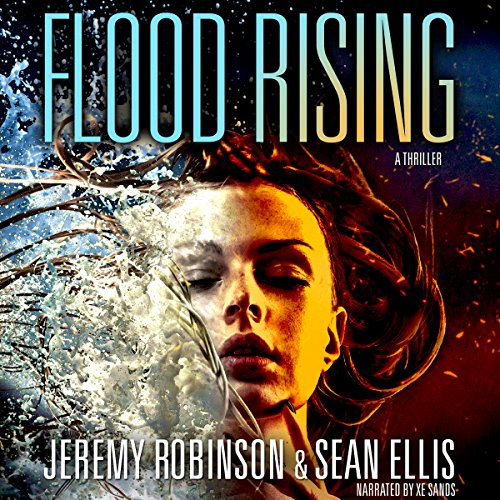 In a minute everything changes. Fifteen-year-old Jenna Flood's discovery of a bomb ticking down from sixty seconds is the first in a series of explosive revelations that destroy her understanding of the world and her place in it. Jenna believes she is an ordinary teenager, busy with schoolwork and helping her father run a Key West charter boat. But when a team of killers shows up, intent on erasing her from existence, she learns the unbelievable truth: she is not who she thinks she is. Alone and on the run, betrayed at every turn, Jenna's path takes her from sun-drenched Key West to the alligator-infested Everglades, the streets of Miami, and the Caribbean islands. Along the way brutal criminals, deadly assassins, and the forces of nature conspire to end her life unless she can rise to embrace an impossible destiny and unleash her own lethal potential. Everything Jenna has been told about herself is a lie, and the truth is a secret that may destroy the world--or save it.

Jeremy Robinson and Sean Ellis, the best-selling team behind The Brainstorm Trilogy, Prime, and Savage, have thrilled audiences with stories of science gone wrong and monsters on the rampage. Now they break new ground with a taut suspense thriller sure to appeal to fans of 24 and The Bourne Identity, with all the pulse-pounding, gut-wrenching action you've come to expect.

What listeners say about Flood Rising

I am always pleased with this author. This book was very captivating, and a much needed exciting new type of writing by the author. Great read.

Robinson has done it again.

This is going to be a great series. Unlike King though Jenna's potential is truly an unknown. Xe Sands was the perfect voice and it wouldn't be the same in any other voice.

Robinson & Ellis have done it again!

Jeremy Robinson and Sean Ellis team up again, this time for an all out action fest. 15 year old Jenna Flood is having a bad day, did that sound like a tag line for 24? Good! Because the comparison is a valid and well deserved one. Someone wants Jenna dead, but why? What harm could a teenager be to the world? We join Jenna on her journey to find out why she is being hunted and what exactly everyone is so afraid of. As always, Robinson and Ellis put our 'hero' through unspeakable events. The audiobook is anything but predictable. It will keep you guessing and sitting on the edge of your seat. Once you start I think you'll be hard pressed to put it down until the end, then you'll feel the overwhelming urge to rush to the authors and ask just one question - when is the next audiobook available.

I was on the fence originally about Xe Sands as the narrator, just because I had never listened to anything by her before and I'm always a little unsure of female narrators performing male characters. The fence doesn't exist anymore..like Jenna Flood, who Sands performed brilliantly, I leaped over that fence and didn't look back. The performance and production were excellent and really entertaining, making for a engrossing listen.

its Die Hard with a teen protagonist!

Where does Flood Rising rank among all the audiobooks you’ve listened to so far?

this is probably the best action thriller i've read so far.

there's an action scene in the everglades, where the teen protagonist handles many of her attackers with skill and poise, this sets up the intrigue of how the story is going to move.

you have to live to learn about yourself.

i am really looking forward to reading the next books in this series. i have thought of many theories about which direction it might go, excited to see if that comes true.

But an exciting series of chases. From the first sentence of the book we are catapulted (now there's a just jacket blurb verb) into the action. Our teenage heroine ends up blasted and shot at, soaked and punched and on the run with almost no resources, and those are just the first few pages. A typical American teenager of current fiction, Jenna is quick to begin resenting her father despite some extremely positive actions on his part to keep her little hind end intact. This theme continues throughout the book and becomes a bit tedious, as do the chases. Just the same, the action flows naturally and does not have the robotic clockwork formula feeling of a Dan Brown thriller.

Jenna's origins are the big mystery, and we get our answers doled out in small breaks from the action in the form of flashbacks and exposition. Can anybody be trusted? Why are various Federal agencies tripping over each other like Keystone Kops? In fact, not just tripping over each other but shooting up big and expensive installations in a hail of gunfire. There seems to be an amazing willingness to kill civilians and cops as well. Although young adult in form, this novel has plenty of gruesome death.

On the plus side, the writing is clear, syntax lucid, and vocabulary and grammar all get a pass. This is no small thing these days when it seems anything can get published and good editors are scarce. The action shows a good grasp of physics. Nobody is surviving bomb blasts without a good reason nor flying cars off parking garage roofs into adjacent office buildings. On the other hand, people seem to heal up pretty darn fast from bullet wounds to little areas like, say, the thigh; up and about on crutches in hours.

In the end, it all turns out to have Big Answers that lead to more Big Questions with "to be continued" stamped all over them. I believe the authors have this all planned out and when we get to the answers it may not have been worth it. I think I will wait on the reviews when the sequel comes out, because I am not waiting with bated breath.

Grabbed me from first chapter! Narrator is fantastic! Very engaging and brings listener into the story!

Non stop action, and twists and turns that are unexpected. Kept me on the edge of my seat! Can't wait for continuation of series.

This book took me places I didn't expect to go and I thoroughly look forward to further adventures in this series. A great action-adventure thriller!

This is the first book I have listened to by Xe Sands, and she does a wonderful job.

Did you say aliens clones and time travel? This book has me guessing the whole time. I'm not sure what new information we will learn next! But I can't wait for the next one!

Well what a rush!!! This is one non stop, action packed and intense read.

We are thrown into the action right from the start with Jenna finding a bomb on their boat counting down from 60 seconds. From that second on, her life is irrevocably changed, whether for the good or bad still remains to be seen!! What follows is a story of survival, of surviving the odds, of friends and foe and finding out who you truly are!

I love finding books like this! It reaffirms why I adore reading. This book sucked me in and didn't let go for one second. I had to keep listening long into the night, just to see what happened next. The plot was incredibly fast paced, yet there is a lot to explore and digest from it. It isn't just an action packed read,there is so much going on for poor Jenna, that it takes a while to wrap your head around! Just when you think you have it figured out, the authors throw in another twist.

This is my first book that I've read that has been co- written by both, I've read a book written by each separately, but it won't be my last!!! Great characterisation, great plot, and with even better writing, this is a must read!!

This is my first book that I've listened to that's been narrated by Xe Sands, and I truly enjoyed her narration. She made Jenna pop and really brought the tenseness of the plot alive. She understood when to ramp up the tension and when to tone it down!

*I received a copy of this for review. This in no way affected my thoughts.*

I love this book! Can't wait for the next one! I really enjoy Jeremy's books and he has done a few with Sean now and they work very well. the story starts with a bang. It continues to keep your headphones on. I could not stop listening! I am sure it's a page turner when read!

It is the first of Jeremy Robison and Sean Ellis that has been narrated by a female. That I have listened too. They could not of picked a better narrator that Xe Sands. I listen to quite a few female narrators and male, I have my favourites as I am sure many do. When I learned that Xe was reading this I was hyped. She is the best voice for this book I think.