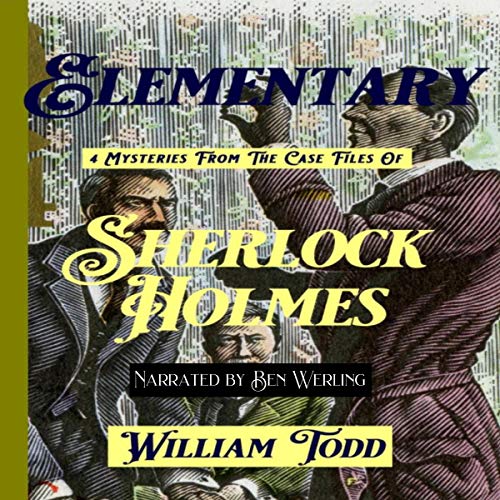 Elementary: 4 Mysteries from the Case Files of Sherlock Holmes

Follow Sherlock Holmes on four mysteries that his best friend and Chronicler, Dr. Watson, has decided to publish after some years.

In the first story, an irritating and unsuccessful suit salesman plummets to his death from one of the highest cliffs in England...only he didn't jump. The second story recounts a chemistry professor found shot to death in his laboratory after having dabbled in alchemy and seemingly turning lead into gold. The third story finds a wealthy businessman bludgeoned to death in his locked and guarded hotel room. Finally, poison has mysteriously found its way into the sacramental wine at a Mass in a rural village with deadly consequences.

What listeners say about Elementary: 4 Mysteries from the Case Files of Sherlock Holmes

It is hard to dislike any well-written Sherlock Holmes pastiche. The character is immortal and the work of talented writers keeps the great detective alive. This collection of stories is entertaining and easy to listen to. My only criticism is that Holmes comes across as a bit harsher than most portrayals. Overall, this is an enjoyable collection!

I love Sherlock Holmes and have every Conan Doyle story read by Simon Vance as well as almost every “new” Holmes audio book. This one is the worst narrating I have ever heard. The inflections are completely inappropriate, he says words incorrectly placing emphasis on the wrong syllables consistently. The voice sounds like the recordings you get when all the words or numbers have been pre-recorded and are being placed in new sentences. Truly, truly awful. Elementary children can read better. The stories are ok but not good enough to slog through the narrating. Pass on this one.