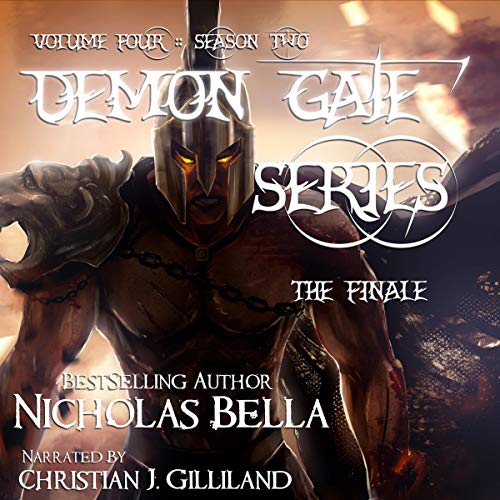 This is the epic series finale. Be prepared for it to be explosive.

When King Adriel failed to prevent the rising of his demonic half-brother, Katashneil, from hell, he unleashed death and destruction on earth. For the demon of pure chaos delights in his quest to bring his brother, Adriel, to his knees in defeat. But the fight isn't over yet as Adriel's Lords and Knights work day and night to bring down Katashniel's army before it's too late.

Will Brian, Raphael, and Andre be able to find the elusive demon and rip his heart out before he finds their king first? Will they even survive the war?

Listener Advisory: 18 and older. Content may be sensitive to some listeners. Discretion is advised.

Excellent Narration and completion of the series

5 Blue Roses 5 Blue Flames Narrator Christian J. Gilliland cut the mustard, succeeded, and surpassed my expectations with his multi-voiced delivery. Never have I heard one narrator spit out so many different voices. He highlighted the various demonic embodiments and their personalities as well as the well-loved triad; Andre, Brian, and Raphael. Absolutely amazing, it felt like I was watching a movie. The sound production was first class, you have to hear it to appreciate it. Andre, Brian, and Raphael split up to cover more ground to find Katashneil. Brian gets the sexy Lord Dakkar to partner with, and boy, do I wish I was Brian. Dakar drips with sexiness which made the plot so much more interesting. Listeners will be lustfully delighted in the hot sex scenes and orgies creamed with a high energy well-rounded plot. The fight scenes were vividly described, and the tension was well-matched with the excellent narration. The world is in trouble, shit explodes and our demon heroes go on a mission impossible. They fucked all the bad demons up and then they fucked each other. Everyone gets their happy ending, nicely wrapped up, with a big pretty bow. I’m sad to see the characters go, halfway through I got nervous about the ending coming closer, but I just closed my eyes, enjoyed all they sex weighing me down, moving through the hard times together 😈. I loved the whole series and definitely recommend it. Happy Listening

It blew my mind! PERFECT AUDIO.

OH-MY-EFFING-GOD! How perfect this audio is! It blew my mind. I can't. I. Can. Not. HOW! The narrator did such an amazing job with this book, I really can't tell how perfect it was. The voices, yeah, they were more then perfect. But I still can't wrap my head around all the little details - when they spoke on the phone, when many demons spoke at the same time, and oh god, all those demon voices! I mean - ORIA! I think I peed my pants while listening to this audio. Many, many times. I don't think I ever listened to someting this cool. This audio was something else. It ruined all the other audios for me. I want to cry in happiness. It was more then perfect. The Demon Gate is one of my favorite series, Raphael, Brian and Andre are so good together, and the other demons, especially Vahiel, aww. Loved listening to this so much. I definitely will listen to this many times in the future.