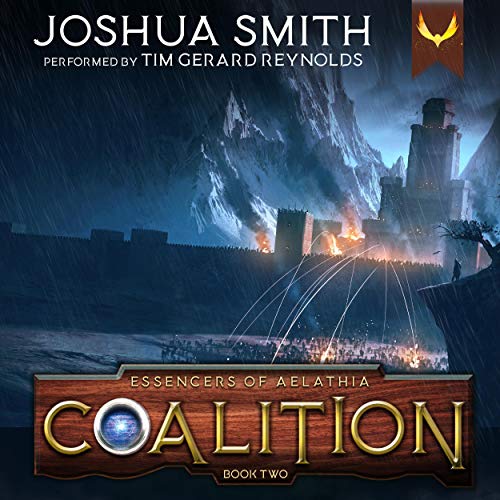 The tides of war have shifted. To win, they'll need new allies.

Agent Raynt, one of the world’s most powerful essencers, returns home after failing to prevent a war against Sorceress Jocina or find his missing friends. There’s a small chance the war can be contained, but only if the politically entrenched Slaver Coalition is completely dismantled. Working alongside a company of elite knights, Raynt enlist another essencer in their cause: An outspoken abolitionist who could help the world find peace. Together, Raynt and his new allies take on the Coalition while political heads of state descend on the kingdom’s capital in a final effort to negotiate peace - but other forces have emerged seeking to capitalize on the world’s disorder. They’ll stop at nothing, including murder, to achieve their own agenda.

On the seas, Raynt’s long-lost friends, A’banna and Bedel, have found no safe harbor. Sorceress Jocina’s forces dog their dwindling fleet of ships - assaulted by zealous assassins trained to kill essencers and by the monstrous sea creatures at Jocina’s call. Can this shattered family make amends and turn the tide of war? Or will their own inability to face the past cripple the chance for Aelathia’s future?

Experience the second book in a Fantasy Epic filled with magic, war, intrigue, and characters that leap off the audiobook. It's perfect for fans of Jeff Wheeler, Brandon Sanderson, and AC Cobble.

What listeners say about Coalition

continuing from the first book this book just gets better, it is worth checking out.

A great continuation of the series

Interesting continuation of the series. I could have listened to it for Raynt's story alone, from fun banter to painful turmoil, I couldn't get enough of this character. This episode focused mainly on Raynt, Yeltson, and Amelia trying to end the Slaver Coalition. In doing so, we get an in depth look at their backgrounds and why it's important to the puzzle of the series. Of course, like the previous installment, there's numerous characters and plots within plots, making it difficult to keep up with at times, but none the less enjoyable. Tim Gerard Reynolds, as always does his excellent job of narration.

The characters are well developed. The story is less difficult to follow than in book one. Nevertheless the story is arduous to follow.
The performance is outstanding and keeps the listener engaged even when the meandering discourages carrying on.

The first book was a little bogged down with details, but still great. This one absolutely makes up for it. If you're on the fence about the series, take the leap.