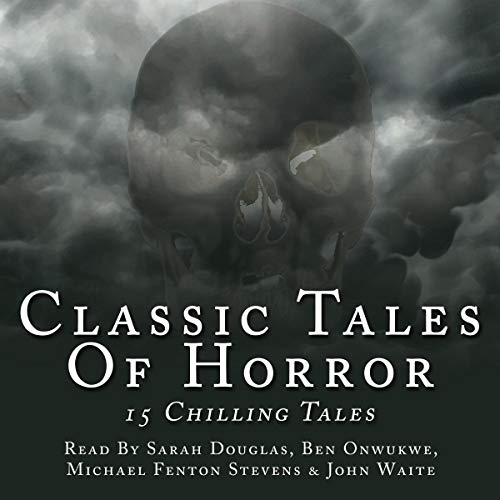 From Henry James and Ambrose Bierce to Bram Stoker and Charles Dickens.

The Man & The Snake by Ambrose Bierce, Man-Size In Marble by E Nesbitt, The Moonlit Road by Ambrose Bierce, The Mysterious Mansion by Honore De Balzac, The Judge's House by Bram Stoker, Lost Face by Jack London, by Charles Dickens, The Ghostly Rental by Henry James, The Phantom Coach by Amelia B Edwards, The Picture In The House by HP Lovecraft, True Relation Of The Apparition Of One Mrs Veal by Daniel Defoe, Transformation by Mary Shelley, The Monkey's Paw by WW Jacobs, William Wilson by Edgar Allan Poe, Canon Alberic's Scrapbook by M.R. James.

What listeners say about Classic Tales Of Horror

Perfect for Halloween. Wish it had the same narrator throughout for a more consistent listen.

loved how they were read but...

I enjoyed the voices of the readers but besides for maybe 2 or 3 of the stories, I could literally guess the ending after a few minutes.

Eveery one of these tales is a masterpiece. And they are all extremely well produced, with a strong voice cast. I particularly looked forward to tales read by John Waite, and Sarah Douglas. Though everyone was great. I whole heartedly recommend this.

Old favourites and a few new classics I hadn't heard

Most of the performances in this collection of horror short stories were very good. a little overdone sometimes though. The naration did bring the full horror to life. The worst story in the collection was by Daniel defoe. Beyond that there are some old favourites and some less well known especially to those not entirely familiar with the ghost genre. Iverall, a well put together collection in my opinion.

classic stories combined with quality readers what's not to like?

answer an annoying announcer between the stories, whiny voice repetitive message and load music which ruins this as stories to fall asleep to.

classic stories, shame about some of the narration

No - great collection of stories with something for everyone, but the quality of the narration varied wildly, and whoever edited it decided to stick in rather brash interludes of music between each one, followed every time by the same pre-recorded injuction to "Listen to our /other/ Classic Tales of Horror!" Like.....I already am...

tl;dr the narration and editorial choices detract from the stories' atmosphere. You'd be better off reading them or seeking out alternative audio versions.

I most enjoyed the characters populating Mary Shelley's 'Transformation' - they are so vividly drawn and somehow compellingly believable, even as they inhabit this intensely non-naturalistic, gothic morality-tale. It gives the story this dimension of psychological horror that feels extraordinarily mordern. Masterful stuff.

Some of these classic stories were delivered in such a dull, colourless manner that it drained them of their impact entirely. The reading of the James story was particularly poor, destroying the story's atmosphere entirely. Some sentences were even garbled or given an intonation that didn't properly render their meaning -- the overriding impression was that the narrator was unfamiliar with the story and hadn't even read it through before recording. Very poor.