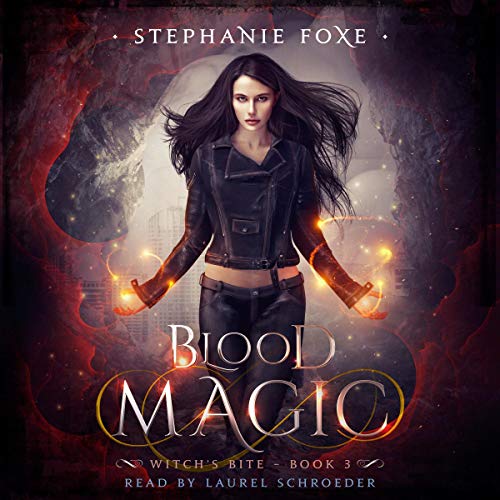 I'm stuck with Reilly and figuring out how to control my power, which is starting to feel more like a curse.

I never expected to be working with JHAPI. I'm still not sure I can trust them, particularly Zachary's longtime co-worker who won't stop glaring at me. And I'm not sure Zachary has forgiven me at all.

To make matters worse, I can't get rid of the welts on my arms, and I'm starting to see things I shouldn't.

Despite my reservations about JHAPI, they seem to have a solid plan to hit the NWR in a way could shut them down for good.

Best laid plans still fail, however, and the NWR has become trickier than ever.

Blood Magic is the third book in the Witch's Bite urban fantasy series. It features an ass-kicking, potion slinging, heroine in a fast-paced, dangerous tale full of magic and murder.

What listeners say about Blood Magic: An Urban Fantasy Novel

Feeling betrayed by everyone she thought she could finally trust, having to basically start over Olivia is not happy. She really does not have a choice though. She is now a part of a team and she does not really trust them either. But she's good at what she is and enjoy's helping. This book is full of action and more secrets come to light. I can't wait for the next book. Laurel Schroeder does a fantastic job bringing the book and characters to life.

It is getting better and better.

The third installment of this series has Olivia facing many challenges brought about by her new magic. Her powers continue to grow and keeping her secret is harder and harder. The NWR plots new attacks with possible devestating consequences and Olivia needs to tread carefully so as not to put herself and others in danger.
This mix of super-naturals makes for a fun and exciting story that keeps you on your toes.

The narration is, a usual for Schroeder, superb and lifts the story to another level