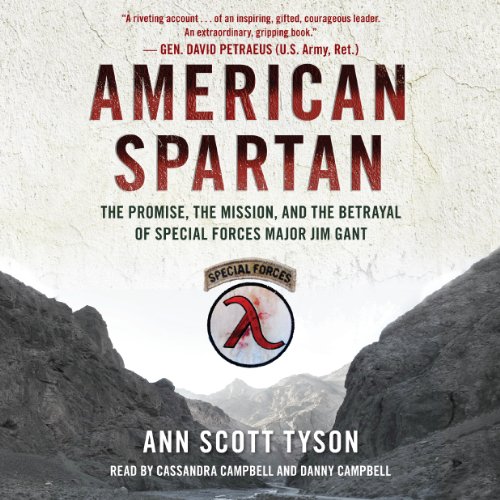 Lawrence of Arabia meets Sebastian Junger's War in this unique, incendiary, and dramatic true story of heroism and heartbreak in Afghanistan written by a Pulitzer Prize-nominated war correspondent.

Some have called him "Lawrence of Afghanistan". To the Pashtun tribesmen he is "Commander Jim", leader of the "bearded ones". He is Army Special Forces Major Jim Gant, one of the most charismatic and controversial U.S. commanders of modern memory, a man who changed the face of America's war in Afghanistan when his critical white paper, "One Tribe at a Time", went viral at the Pentagon, the White House, and on Capitol Hill in 2009.

A decorated Green Beret who had spent years training indigenous fighters, Jim argued for embedding autonomous units with tribes across Afghanistan: These American soldiers would live among Afghans for extended periods, not only to train and equip tribal militias, but to fight - and even die - alongside them in battle. He argued that we could earn the trust of the Afghans and transform them into a reliable ally with whom we could defeat the Taliban and Al Qaeda networks. The military's top brass, including General David Petraeus, then commander of U.S. Central Command and overseeing the war in Afghanistan, and Admiral Eric Olson, head of Special Operations Command, approved the plan and gave Jim the go-ahead to embark on the mission.

p>A war story like no other, an unprecedented account of a warrior who took up the cause of villagers as if it were his own, and of a woman on the front lines of a distant war, American Spartan is an unforgettable tale - and one of the most remarkable and emotionally resonant narratives of war ever published.
©2014 Ann Scott Tyson (P)2014 HarperCollins Publishers
Afghan & Iraq Wars Politicians Special & Elite Forces Military
Show More Show Less

What listeners say about American Spartan

this is a story of a legand n a betrayal.
soemting we see often..
the greed of higer appointments. is someting that is everywere.
thx for the time.. put into writing this book.
.
if the listeners is lloking for an action book. this isnt it.but if the listener is looking ofr the skills
of war n negotiations.. this is a good guide book

There was good use of male and female narration through this book to support the main players.
It really supports the need for greater intervention for SF guys suffering PTSD and the divide between what politicians think is achievable and what it takes to get there - they are unconventional forces for a reason!

At times a challenging listen at times, worth it in the end.

THE TRUE ARMY OF ONE!!!"THE SPARTAN"

This is coming from a guy who was in the Army and my father retired from the Army. Major Gant was a soldiers soldier, the type of gung ho officer everyone wanted. After reading this book I'm ashamed that the top brass let this happen!! Did Major Gant break some Army regs.? YES!! Has most every solider in the Army done the same? YES!!! Jim Gant is a true Spartan. He got the job done and never lost a man down range and that is the stuff the Army can't take away. Major Gant's legend will grow and it should. I think Jim did turn tribal but that is what he was asked to do.Taking Ann Scott in was over the top but the heart wants what the heart wants. Drinking beer on christmas and you loose your rank? I was in Kuwait and alcohol and more was available while I was deployed. Everyone who has served in the military world knows Major Jim Gant was shafted. Its sad but Jim Gant can watch my six anytime!!!! One article 15 can't take away what you did for this country. Thanks for all you have done and your service!!!! Major Jim Gant makes me proud to say I was in the Army!!!! Hooah!!!

Wow! One of the best books I’ve read in a while!

And absolutely fascinating story about the intelligence and sacrifice of one man for his country and the Afghan people. I read over 100 books a year and this is one of the best books I’ve read lately.

This is undoubtedly the best book I have ever read as a retired Army vet this should be a required reading to every officer in our ranks this is exactly how the Army is ran by officers that are not concerned with winning but getting promoted and wi do so at anyone’s expense as they live like kings and pass judgement down from there thrown to the warrior on the ground that has sacrificed so much while they sacrifice so little if anything at all.

Major Gant is a true warrior and hero

Incredible story about a true American hero & the definition of a warrior. Never lost a man & made those around him a better soldier and a better person. Thank you for your service Major Gant.

Jim Gant is a true warrior. Shame be brought upon those that turned upon him and his service.

The problem with military leadership

The story line was factual. The true story of an American Spartan despised by contemptible leader ship for doing an outstanding job.Evidentially the only way it could be done so the local tribals leaders trust and loved this man. They accepted him as a true humble warrior who Actually embrace their culture and cared about their safety.

Nobody should assume our military acts with honor.

I knew the Navy sucked, but to see Army SF persons treated like this is so demoralizing. How can anyone takeaway the belief that we were actually going to try to win the war?

The book was well written and performed..def a must read recommendation..wish the best to Jim And Ann.

Amazing story and glad it was told. Stories like this help us understand the beauty and richness of other cultures that we are not able to experience first hand.

A conflict that leaves you conflicted

Without spoiling the content its evident that individuals have their share of the blame to carry for their actions. I find it hard to find sympathy for the action committed that was flagrant breach of protocol. However , this does not mean I think how individuals were treated was proportionate or reflects well on the chain of command.

Its also evident that the US military is woefully incompetent in spotting burnout, PTSD, petty senior officers and those wishing to make a name for themselves. Alot of what transpired should have and could have been mitigated by better senior leadership.

I came away from this with equal amounts of respect, admiration and disappointment. Its a fascinating story of a modern day Lawrence of Arabia. Credit to the author for not trying to palm of the individual responsibility of those involved. At no point do they attempt to obfuscate the culpability.

Betrayal though, no. I think this is too strong a term in these circumstances . If you give your enemy an opening do not be surprised when they take it. Its fair to say that Gants actions made himself vulnerable. Its also fair to say he was already compromised emotionally and physically before his last tour and this should have been picked up on before deployment. This does not mean he wasn't a great soldier and leader just that he was compromised.