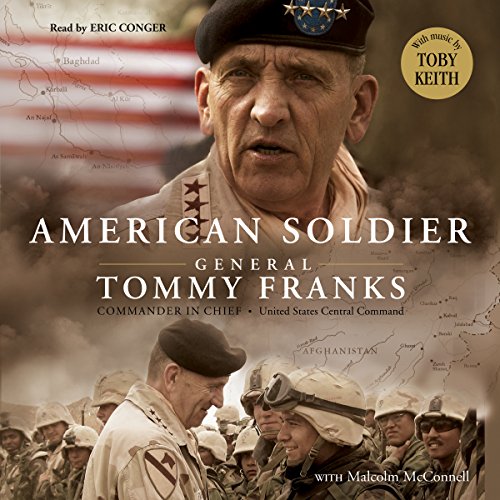 Few individuals have the chance to contribute so much of themselves to the American story as General Tommy Franks. In American Soldier, he captures it all.

The Commander in Chief of the United States Central Command from July 2000 through July 2003, General Tommy Franks made history leading American and Coalition forces to victory in Afghanistan and Iraq, the decisive battles that launched the war on terrorism.

General Franks retraces his journey from a small-town boyhood through a lifetime of military service, including his heroic tour as an Artillery officer in Vietnam, where he was wounded three times.

Drawing on military records declassified for this book, Franks offers the first true insider's account of the war on terrorism. He puts you in the Operations Center for the launch of Operation Enduring Freedom just weeks after 9/11, capturing its uncertain early days and the historic victory that followed.

When President Bush focused world attention on the threat of Iraq, Franks seized the moment to implement a bold new vision of joint warfare in planning Operation Iraqi Freedom. Rejecting Desert Storm-style massive troop deployment in favor of flexibility and speed, Franks was questioned by the defense establishment, including Secretary of State Colin Powell. Yet his vision was proven on the ground: Within three weeks, Baghdad had fallen.

Franks describes the covert diplomacy that helped secure international cooperation for the war, and speaks frankly of intelligence shortcomings that endangered our troops, and of the credible WMD threats that influenced every planning decision. He offers an unvarnished portrait of the "disruptive and divisive" Washington bureaucracy, and a candid assessment of the war's aftermath. Yet in the end, as American Soldier demonstrates, the battles in Afghanistan and Iraq remain heroic victories, wars of liberation won by troops whose valor was "unequalled by anything in the annals of war".

What listeners say about American Soldier

I found the book to be inspiring, demonstrating the true virtues of an american boy, properly raised by loving parents who then goes on to a career of service to his country. The big difference between this boy and others like him during the time is that he ends up becoming a general, responsible for thousands of people during a time of war. I think this is a good read for anyone who somehow believes that america's stability and might comes from anything other than family.

even more proud of our military

After listening to this book I'm even more in awe of the abilities and character of the men and women in our military. It's unfortunate that so many in the media are drawn to the negative like vultures to decaying flesh.

I'm appreciative of the insight the General provides as to what went on behind the scenes in discussions before the war. I am so sick of all the conspiracy theorists on both sides continuing to hang onto their theories despite any supporting evidence and many times evidence to the contrary. I'm doubly sick of those who fuel the conspiracy fires with outright lies, exaggerations, and misrepresentations.

Therefore I thank the General for his frankness and keen insight/wisdom.

Excellent! Revealing! A Must Read/Listen!

From the opening paragraphs to the final conclusions "American Soldier" presents an enlightening expose into the life of General Thomas R. Franks, and into the US Army mentality of the last third of the 20th century. As a former soldier and a Vietnam Era Veteran I found his characterizations completely honest and authentic. There was never a dull moment from his innner most thoughts dealing with his personal life to the command decisions that led the United States into a very controversial war (Iraq). His experiences in one controverial war (Vietnam) set the foundations for his leadership in Iraq even though the two wars were as different as day and night. Regardless of one's political persuasions General Franks communicates his feelings beliefs, ideals, in a way that is neither offensive to the liberal anti-opposition, nor in a manner designed to be used as a club by the pro-war conservative elite. This book is not only great as a biography, it excellent for a historical perception on the Iraq War.

Great read for an old soldier

This book really connects with those who appreciate "duty to country." My father, a WWII veteran, listened to half of this unabridged version as soon as it arrived in his mailbox from me as an early Christmas gift.

The war on terrorism without the media spin. A refreshing view from major player from his prespective. Valuable insight into the man, his career and his family support. A successful man and leader. The audio is nicely done and flows smothly to conclusion. Well done.

General Franks gives a good account his own history, and an excellent account of the wars in Vietnam, Afghanistan, and particularly Iraq. But as the title indicates, it is written from a dutiful soldier's perspective, with its pluses and minuses. Other than General Powell in his remarkable My American Journey, Franks offers too much technical detail, military speak and acronyms; and too little political context, reflection and criticism of his civilian colleagues and superiors (excluding Richard Clarke). Nevertheless a highly interesting, well written (and read) book which is good entertainment as well as a valuable source for research. I recommend to combine the book with Anne Garrels' Naked in Baghdad, to get the view from the ground. I got the impression that Mr Franks spoke at least parts of the book on tape - so it makes an excellent audiobook. Highly recommendable.

This is an incredible book about an incredible man. It is real life Tom Clancy and an unpartisan view inside our current administration. We should be proud of General Franks, our military and our current armed forces in harms way. I see more truth in this book words than the Hollywood propagandist and media mouthpieces. I highly recommend this book to you.

Gen. Franks is an officer and a gentleman

I'm a 62 yr old former Infantry captain who served between Vietnam and Desert Storm. I am a liberal democrat who was very opposed to the war in Iraq, although I thought Afghanistan was necessary. I read everything I can about those wars and the lead up to them. So, I suppose that I should not like Gen. Franks. But if there is any military or political person involved in those years that I would like to sit down with and eat some barbeque and drink a beer, it is "Tommy." He has been criticized in other books by journalists. But to listen to his take on the events of 2001-2003 is an enjoyable eye opener. He's honest about his upbringing, flunking out of college and coming into manhood in the Army. He admits that mistakes were made leading up to the wars, but has no apologies for the patriotism that drove him and others. He is honest about those that he could work closely with and about those he found to be sometimes difficult. But he is gracious to all. Having lived in Texas for 20 years I can attest that he represents a true flavor of the best of Texas. So, listen with an open mind. General Franks is an officer and a gentleman.

A new twist on military novels

For the first 30 minutes, I wondered where this was going. After that, a real story began to develop and I learned things about the war on terror and Iraq that I simply never knew. Franks reveals himself as a human being who was pushed by the events of 9/11 to defend our country in the only way he knew how. It makes no difference if you supprt or object to the war one terror, this book will make you think again.

A soliders story about soldiers. These brave men sacrafice every day so we may enjoy our freedoms. Tommy Franks gives us an idea of how they think, how they feel, and how they endure the time away from family and friends.