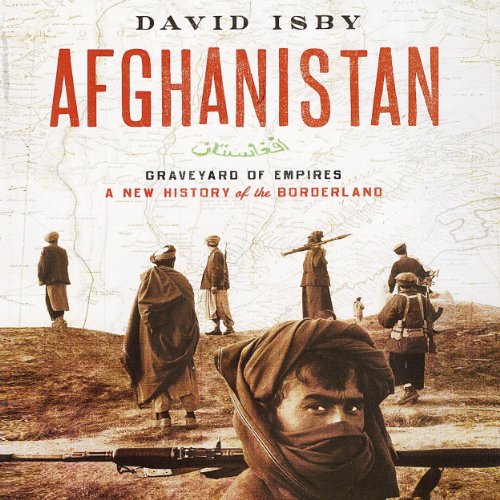 David Isby's comprehensive, meticulously researched work is a deep-dive into the history and culture one of the most volatile and impoverished war-torn nations in the world; one that has steadfastly resisted countless campaigns by industrialized nations to establish a modicum of stability.

Greg Abbey's confident, authoritative tone underscores the gravity of the current situation in the "graveyard of empires" that Isby depicts, which has become a breeding ground for terrorism and has laid fertile ground for warlords to commit atrocities. A must-listen for anyone interested in current world affairs.

A startling history of modern Afghanistan - the story of a country caught in a vortex of terror. Veteran defense analyst David Isby provides an insightful and meticulously researched look at the current situation in Afghanistan, her history, and what he believes must be done so that the U.S. and NATO coalition can succeed in what has historically been known as “the graveyard of empires.”

Afghanistan is one of the poorest countries in the world with one of the lowest literacy rates. It is rife with divisions between ethnic groups that dwarf current schisms in Iraq, along with conflicts between rogue factions from Pakistan, with whom relations are increasingly strained.

The task of implementing an effective American policy and cementing Afghan rule is hampered by what Isby sees as separate but overlapping conflicts between terrorism, narcotics, and regional rivalries, each presenting separate yet equally challenging issues to resolve. This book provides the road map to overcoming these obstacles and finding a way forward for the U.S. and the Afghan nation.

What listeners say about Afghanistan

Making sense of the vortex....

A valuable read if you want to, or need to, understand something more about Afghanistan.

Isby helps one appreciate how important Afghanistan is, and will continue to be, for many powers. His prescience seems to have predicted what we now see in terms of IS. He walks us through the complex paths of history, relationships, personalities and more that have shaped Afghanistan.

We learn about how inter-twined Afghanistan and Pakistan are, and of repeated mistakes in relation to governance, aid, and international support.

The sections on culture and context, on aid and its limitations, and insights regarding the long-term struggle to shape the Afghan institutions of the future struck home - insightful, well referenced, and balanced.

A dense but informative book - well worth a read if you have need to understand more about this fascinating but tragic land.

Good if you have insomnia.

Would you try another book written by David Isby or narrated by Greg Abbey?

What was most disappointing about David Isby’s story?

It's so complicated and dry that it's hard to bear. I really, really, really tried. Gave it several chances but I still haven't even got through half of it.

I wanted to know more about the country due to ISIS crisis. I thought it impossible but I know less then when I started. Without clear structure and coherent narration this book is as easy to follow as a short-cut on Sahara in sand storm.