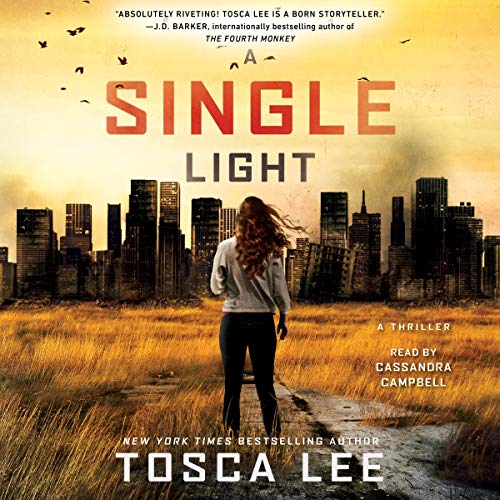 In this gripping, high-octane sequel to The Line Between, which New York Times best-selling author Alex Kava calls “everything you want in a thriller”, cult escapee Wynter Roth and ex-soldier Chase Miller emerge from their bunker to find a country ravaged by disease.

Six months after vanishing into an underground silo with 61 others, Wynter and Chase emerge to an altered world. There is no sign of Noah and the rest of the group that was supposed to greet them when they surfaced - the same people Wynter was counting on to help her locate the antibiotics her gravely ill friend, Julie, needs. As the clock ticks down on Julie’s life, Wynter and Chase embark on a desperate search for medicine and answers. But what they find is not a nation on the cusp of recovery, but one decimated by disease. What happened while they were underground?

With food and water in limited supply and their own survival in question, Chase and Wynter must venture further and further from the silo. They come face-to-face with a radically changed society, where communities scrabble to survive under rogue leaders and cities are war zones. As hope fades by the hour and Wynter learns the terrible truth of the last six months, she is called upon again to help save a nation she no longer recognizes - a place so chaotic she’s no longer sure it can even survive.

What listeners say about A Single Light

First, I enjoyed the books, and love the genre :). you can't help but fall in love with Wynter, and that's thanks to the writing skills of the author. I read this hoping to see the gospel brightly shine through the trauma, pain, and loss. Instead the author missed those opportunities. why not point those self-sacrificing moments back to the one who paid the ultimate sacrifice? The author gives some clues to God in the lives of her characters who are most loving and sacrificial, but only one character is really clearly changed by God, and that character is very much in the background. Also, just as a warning. Those of you considering the fourth of the ten commandments... The name of the Lord is taken in vain many times throughout the book ("Oh My God"). In all, there isn't any sexual scenes (so grateful). And doing what is right is elevated even at the cost of one's own life. These are great morals to teach, but wished they were more connected to the great moral/law giver. Thank you Tosca for the wholesome read, and wish you no discouragement from this review. Only wishing to inform readers and encourage you as well as we all press on for the upward call of Christ. :)

Not really about an apocalypse

This series took a turn toward a “ touchy/feely ” book, not about surviving. First in series was good but this one I couldn’t finish. The main character has turned into someone incapable of making sounds decisions. Like driving 2 hours in a search for a hospital in an obvious deteriorated world for medicine to save someone who wouldn’t last the two hours anyways, leaving two girls that depend on her back with the sick woman to make the illogical journey. Gets attack going thru an obvious trap and gets a poor helpless person they picked up to help killed. You’d think her boyfriend who is ex-military would have more sense. Most apocalyptically surviving people either learn or are learned. This one is just fluttering around. Utterly ridiculous and leaving you wanting to smack the MC. Although a Beautiful written, the story is just sorry. Returned.

Just as captivating as the first book!!!

I’m not one for novels but this series just arrested my imagination and threw me into a state of utter awe at the brilliant writing and realistic story line and narrative!

Let down after the first book.

While this book answers a lot of questions that you were left with after the first book, I was frankly disappointed! I did not like the overall tone. Pretty edgy for a "Christian" author.

This was the second book in a sequence, and I enjoyed both. I found the pace to be right, including enough time with the characters to know them, but not so much personal drama that it would bog the story. Events unfolded with enough surprises to keep me engaged, and the unusual writing style maintained a feeling of being in the moment. I will look for more books by this author.

Amazing sequel to The Line Between. So good. Tosca Lee had me nervously looking over my shoulder for sick people, I was so drawn into the story.

Wow. Y’all about a wild ride on the crazy train. There were more twists and turns in this Tory than I saw coming. It was gripping, intense and a mirage of other emotions. Wynter and Chase are in the silo, counting down until opening day when they get a surprise none of them saw coming. The doors open early and yet all around them is nothing more than... silence. Noah and his group are not waiting for them as they promised. A plane crashed into the barn and now, that may a totally freak accident, Wynter and Chase have to adventure out to find medicine for Julie who has developed a life threatening infection. Nothing has been easy for Wynter since she was kicked out of the commune - her home - which has been leas than a year ago. With Chase at her side, watching her back they set out into the new world. One that should be healing but only seems to be dying off faster. Time is a necessity they don’t have. Resources are small but the hope they have is their best companion. It was a great adventure and I didn’t see it needing the way it did. I loved it! With each new chapter, each new leg of this adventure I couldn’t help but fall more in love with these characters. I honesty wish there was more.

We listened to both books in the series back to back. Couldn't put them down.