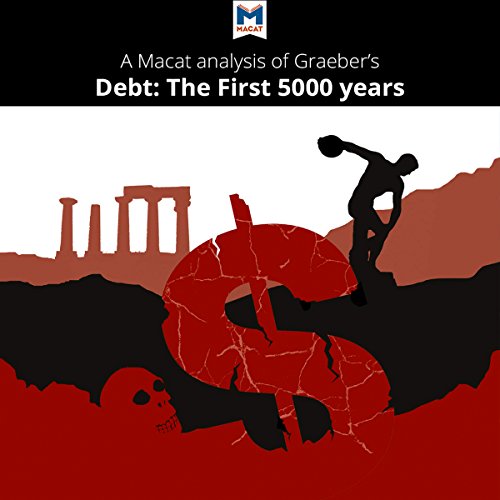 A Macat Analysis of David Graeber's Debt: The First 5,000 Years

By: Sulaiman Hakemy
Narrated by: Macat.com
Free with 30-day trial

David Graeber's 2011 book, Debt: The First 5,000 Years, seeks to overturn hundreds of years of economic theory, specifically the idea that people have a natural inclination to trade with each other and that the concept of money developed spontaneously to overcome the inefficiencies of a bartering system. The US-born social activist uses his training as an anthropologist to trace the histories of money and of debt and reaches the conclusion that money was in fact created by the state as a means of exploiting the poor.

First published at a time of huge economic turmoil around the world, Debt has been warmly received by activists looking for an intellectual foundation for alternatives to capitalism. As an activist himself, Graeber believes people can do better than relating to each other simply by measuring and enforcing debt. He says, "A debt is just the perversion of a promise. It is a promise corrupted by both math and violence."

What listeners say about A Macat Analysis of David Graeber's Debt: The First 5,000 Years

The author repeats his main observations, having to go with Graeber’s anti-capitalism, a dozen or more times. He gives you no guidance on those dense middle chapters about the Axial Age, Middle Ages, etc. The only content he refers to is all from the first or second chapter (about the barter myth). I would have wanted someone who could in an hour and a half address some of the other issues Graeber discusses.

Good analysis, but it takes too much time to read chapter number title and repeat it all twice. It feels like 10% of the book is just reading chapter name.

Another academic and idealistic mindset not living in the real world. Although many good points are made, it is an unnecessary read.