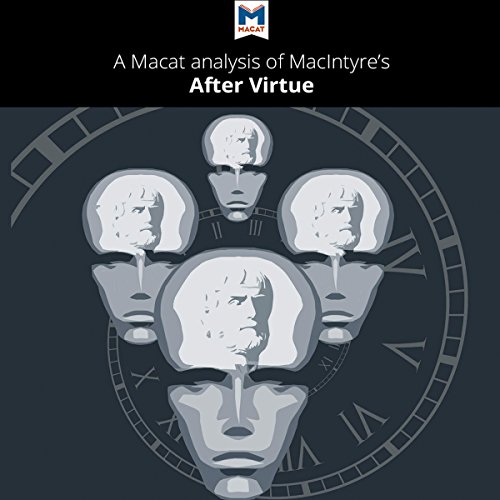 A Macat Analysis of Alasdair MacIntyre's After Virtue

This is a book for anyone who wants to understand exactly what we mean by ethics and morality today. One of the most vital and controversial works in the 20th-century world of moral philosophy, Alasdair MacIntyre's After Virtue examines how we think about, talk about, and act out our moral views in the modern world.

Finding that the ways in which we engage in our moral reasoning have no common standard of judgment, MacIntyre's 1981 book challenges many contemporary theories of morals. He looks for answers in unusual places, reexamining the ancient Greek philosopher Aristotle's views on ethics and how they are linked to the idea of virtue.

MacIntyre's book continues to influence our moral understanding. In 2011 - some 30 years after it was first published - the American Political Science Association awarded MacIntyre the Benjamin E. Lippincott Award for After Virtue, recognizing it as a work of exceptional quality and continuing relevance.

I wanted "After Virtue" but this isn't a bad alternative. The reading is a bit wooden at times - presumably because it's aimed at students and the narrator felt compelled to imitate the drone of undergraduate lectures on some level? Regardless, it was a pretty good introduction to After Virtue and neo-Aristotelianism.

I thought it would be more detailed and substantive. It wasn’t. It was all General.

was handy in a sense for someone with no knowledge of McIntyre but very repetitive .. waste of credit