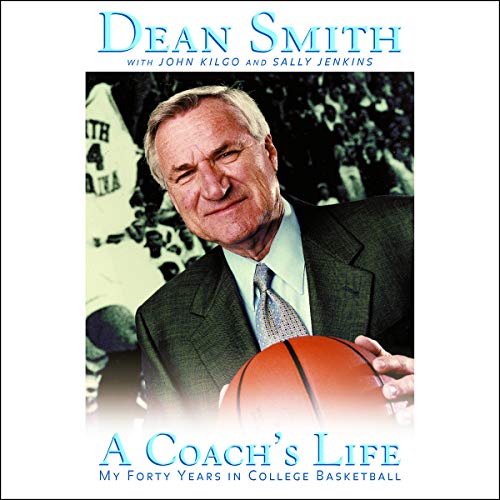 Legendary University of North Carolina basketball coach Dean Smith tells the full story of his fabled career and shares the life lessons taught and learned over 40 years of unparalleled success as a coach and mentor.

For almost 40 years, Dean Smith coached the University of North Carolina men's basketball program with unsurpassed success - on the court and in shaping young men's lives. In his long-awaited memoir, he reflects on the great games, teams, players, strategies, and rivalries that defined his career and explains the philosophy that guided him. There's a lot more to life than basketball - though some may beg to differ - but there's a lot more to basketball than basketball, and this is an audiobook about basketball filled with wisdom about life. Dean Smith insisted that the fundamentals of good basketball were the fundamentals of character - passion, discipline, focus, selflessness, and responsibility - and he strove to unite his teams in pursuit of those values.

To listen to this book is to understand why Dean Smith changed the lives of the players he coached, from Michael Jordan, who calls him his second father and who never played a single NBA game without wearing a pair of UNC basketball shorts under his uniform, to the last man on the bench of his least talented team. We all wish we had a coach like Dean Smith in our lives, and now we will have that chance.

"Dean Smith epitomizes what a coach can be - teacher, counselor, mentor, example, friend." (Bill Bradley)
"Coach taught me the game.... He's like a second father to me." (Michael Jordan)
"Dean Smith is not merely a basketball coach of historic accomplishments. He is also a man of uncommon integrity and decency. His life story will be heartening to the many Americans who have watched him shape two generations of young athletes to reach their full potential as men." (Senator John McCain)

What listeners say about A Coach's Life

Good book. If you don't know basketball college or professional players during the 1960s-97 it can be hard to follow at times. However a great book about servant honest leadership as well as a good bball book.

Excellent if You're a College Basketball Fan

Would you listen to A Coach's Life again? Why?

No, I think once was enough.

I would have expanded on stories about Mr. Smith's personal life.

Which character – as performed by Eric Conger – was your favorite?

I read this because I am a Tarheel. I knew about Dean Smith's legacy at UNC, and wanted to learn more about his character and personal story. I admit I'm not a die-hard basketball fan. There was a lot of technical talk about basketball players, which I didn't fully understand-- but it was interesting to learn about Michael Jordan and other's player's personal stories with UNC. I enjoyed it well enough to finish-- but for me, there was not enough about his personal life including the practically complete omission of his divorce. Practically no mention of female characters. As a woman, this bothered me a bit.

Good story, a bit too vague though

Would have liked more detail, this was more if a general philosophy of coaching college basketball, not so much a deep dive into who he was and what specific things he did. It is a worthwhile read either way.