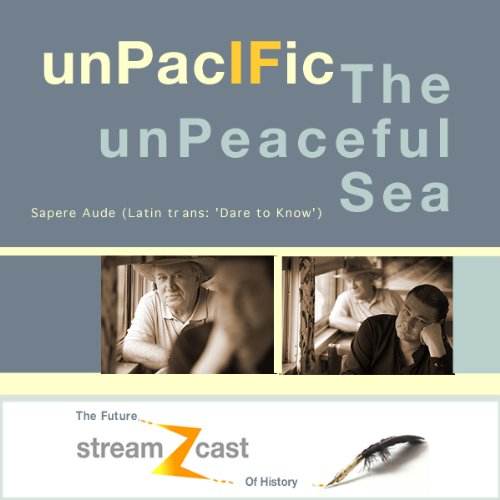 unPacIFic - War in the Peaceful Sea

The atomic and molecular structure of history is created by moments in time and the interactions of those instances. Micro-moments can have macro-consequences. Consequence, Empire, War.... Space and time collide.

This streamZcast compendium takes stories of four Americans whose lives were dramatically influenced by a simple split second in the wink of a young girl's eye at a New York racetrack in the America of 1874. These life stories came to a head in 1941 when the vast ocean that Magellan named "The Peaceful Sea" became decidedly unPacIFc.

Four lives affected in very different ways by a moment in time. A brief instant that changed the economic and political structures of the planet that we populate. The American and Allied conflict with Japan in the Pacific has proved to be a passing of the baton. The baton of Empire. And the true establishment of the American Century. These four stories and linking narrative get under the skin and into the hearts of protagonists in the way that only storytelling can. To add contrast, context and texture, European viewpoints are included, further broadening the listener’s knowledge and understanding of a broader world.

American historian, geographer, and occasional humorist Bill Goodwin, and European writer and muse Mark Woods, combine their knowledge and insights. Their aim? To reconnect people with history through the lives and stories of real people. You, me, us.That is the streamZcast.com ethos.

The streamZcast.com compendiumZ are written, composed and arranged specifically for the Internet and smart devices. Smart...And why is the 'IF' in the compendium'Z title capitalised? Clue: The youngest Nobel Literature Prize winner... my son. Sapere Aude (Latin trans: 'Dare to Know')

"This storytelling approach is both entertaining and information rich. The perfect intro to a life-long history addiction for young and old. I wish I'd had access to these alternate learning tools when my children were young. They would have us to open their eyes to a broader world." (Dr. Marvin Russel, Ph.d., Former Dean of the Ogden Coolege of Science at Western Kentucky University)
"Imagination and knowledge on steroids. I work as a commercial psychologist in Londo, England, and use parts of these new media works in my facilitation resarch groups. And I love the "Sapere Aude Dare to know idea." (Owen Stevens, BA Hons and volcano climber)

What listeners say about unPacIFic - War in the Peaceful Sea