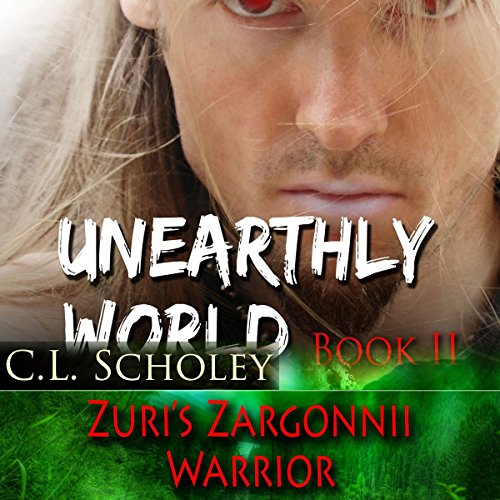 Zuri finds herself in the hands of a Zargonnii warrior after she and her shipmates are extracted from a strange world. Hunted by the heinous Tonan and sought after by the deadly Gorgano, Zuri is mortified when she realizes humans, especially female humans, are considered a rare, exotic novelty. She has no intention of being put on display for massive warriors to gawk at. She plans her escape.

Kobe grows fond of the little mouthy human female placed in his charge for the duration of the space flight home. Once they land, she will no longer be his problem. Everything changes in seconds when he finds her in the ship's bay, hanging by a thread in a teetering space shuttle, bound on either self-destruction or escape.

Without thought to his safety, Kobe jumps from the shuttle when Zuri falls out and plunges to the planet beneath. Zuri has no idea what danger they are in as they embark on a perilous journey. Both know if they make it out of the jungle alive, they will be separated - unless Kobe can figure out a way to keep his new mate.

This was the best story. Dumbass and Moron are such great words and so well used in this story!! This is Kobe and Zuri's story and you will not be able to put it down. This fast paced entertaining story will keep you enraptured the entire time.

Kobe rescues Zuri and 2 male humans on a planet they crash landed on. The beings on that planet wanted the humans off because they kept attracting bad guys, yep you got it, Tonans and Gorganons. After their rescue, Zuri tries to escape and ends up falling to the planet with Kobe. From there the entertainment really begins. Death, danger, and drama are inflicted upon the two as they make their way home. Then of course to top it all off kidnapping! poor Zuri ;(

C L Scholey created a great story here that is well worth a credit. It may be a short listen being only 5 hours, but the laughter you get is well worth it. Cassandra did a great job narrating it too.

Not as good as the Last One

I like this series but this book was my least favorite. Probably just me being a little touchy about some things. I don't like the way they call Zuri mouthy and some of the abrupt mood changes. It seems demeaning to me and took away a bit of the story. I think the name calling was supposed to part of the banter that was an attempt to add humor. It probably works for others but it felt flat for me. I don't think you need to demean someone to find comedy.

I have listened to just about all of this Series and love every book I highly recommend this series it cover Action, drama, love, Danger, suspenseall my Expectation I love all the characters and it's straight to the point I felt like I was took on a venture with the characters

This story of the gathering romance between Kobe, a male alien, and Zuri, a female earth person, takes place out of space after weather-related causes end most of the population on earth. Zuri and 2 male comrades are saved by Kobe and his people, since they are the remaining humans after others in their group are killed on the planet they landed on after escaping destroyed earth. There’s never an indication of date or time in history or the future. And planet names are not given, only names of different alien groups.

And, unfortunately, there is great monochromatic thinking in the author's perception of all things good vs all things bad in her very limited scope and imagination of the alien habitats and inhabitants. This was the worst aspect of the story. The second worst aspect was that—though the story was good, generally—small things didn’t hold together. These detracted from the story. Like, once Zuri and Kobe are alone on his planet, following a harrowing near-death experience, issues of them finding water, bathing, using the bathroom, and other basic necessities, beyond eating, or not really addressed at all. By the time water is addressed, they have been on the planet 2 or 3 days. During that same time, food is addressed, but not water. Not addressing bathing was strange since issues of Zuri smelling under her arm had been addressed by Kobe earlier while they were aboard Kobe’s spaceship. And, apparently, they never had to relieve themselves or deal with other bodily functions. I don’t mean that the author should've dwelled on these aspects, but those are some of the small things that would significantly contribute to someone’s experience of living off the land and trying to escape an unknown place. The author tried to address different struggles but almost totally ignored some of the basic struggles anyone would have to deal with and be effected by. Another example of the story not holding together was a point in the story when Zuri and Kobe were on land, at Finn’s (I can’t say who that is b/c of spoiler issues) friend’s house and then, all of a sudden, they were aboard a spaceship. I rewind the recording thinking I had missed a part of the story; at one point they were on land at a house and then they were aboard a ship. There was no indication regarding this change, this shift in their physical placement. Similarly, Zuri had a psychic power revealed early in the story. Later, near the end of the story, her power was shown to be much more than was ever hinted at or obvious prior to that point. And the change and increased psychic ability of Zuri was so huge that it appeared to come out of nowhere and be an addition to the story to meet a goal of the author. Therefore it was forced, false, unbelievable, and very contrived. Finally, the last negative is that Zuri’s two male comrades, the only other surviving humans, were basically forgotten until almost the end of the story. She was totally out for herself, and, until the ending of the story, they were barely even mentioned or shown any concern.