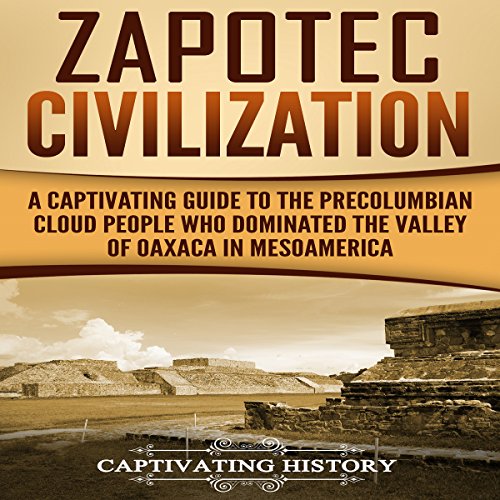 Explore the captivating history of the Zapotec civilization.

The Zapotecs lived and thrived and became a civilization of interest to the Conquistadors. As one of the largest Mesoamerican civilizations at the time, they helped to shape and form the world the Conquistadors encountered upon their arrival. Rivaling the size and complexity of their Mayan neighbors, the Zapotec were innovators and intellectuals who created a society that was markedly similar to the kingdoms and social structures.

The Zapotecs were a fascinating people, and this audiobook aims to give a fresh look and understanding to a civilization that was just as complex, structured, and regal as any of their Mesoamerican, South American, or European counterparts.

Some of the topics covered in this audiobook include:

Get the audiobook now and learn more about the Zapotec civilization!

What listeners say about Zapotec Civilization

This is an adequate summary for Junior High

Not what I expected. Not only is it written on a seventh-to-eighth grade language level, but the history and culture seem to sugarcoat many harsh realities.
The result is mind numbing pablum that I can't recommend.

OK but tough to listen

Good overview for the non-professional, e.g. for having some insights before visiting the Zapotec archeological sites or an exhibition. Tough to listen to because the narrator rushes through the text. A pdf with table of contents would help greatly. I had to make notes to avoid being lost.

Weak on information about the Zapotec

A thin and erroneous description of the Zapotec and the Oaxaca Valley. Not worth the slim 2 hours, which I could not get through.

This is truly an excellent guide to the Zapotec Civilization. Well written and lots of interesting facts. Highly recommend. The opinions I have expressed are my own.

A quick and informative read.

The reader feels like the author has appeared from a totally absorbing world of the Zapotec after finishing the book. Grateful thanks to Captivating History for the ARC and the fabulous chance to read this astonishing book!

I l earned a lot from this author.

It is an outstanding starting point for probing into the subject of Zapotec. Allowing them to find where to start looking on the subject. The listings in the backwill allow them to go on from there to dig into what is known by the museums and universities holding the items associated with the entries to get the full story behind them.

lushly illustrated volume for me.

Such a worthy work, one unseen previously in the archaeological community, warrants to be on the shelf of any person remotely interested in Prehispanic Central Mexico and Mesoamerica as a whole.

This is more than a history book.

This influential work by captivating history team, details the evolution of the Zapotec. Instead of concentrating solely on the archaeological record to document the evolution to two closely related peoples, this volume utilizes glottochronological and ethnographic techniques to track their deviation.

This is perfect history book.

I love listening books, especially on history topic. It was a heavy read, but a thorough treatment of the evidence.

A rare kudo, believe me.

The author delivers a stimulating new method called actin theory, viewing history as resolute by the actions of real people, not imperceptible services of the environment or society.

A quick and informative read. Details are written in an easy to understand way. Recommend this Captivating History for all history buffs.

I don't know much about the Zapotec civilization but the book is way too brief for someone individuality wants to understand the institutions and the culture outside basic. Now this might be pardoned in a book that's written for a certain type of audience.

All of this series is great....

This gives an uncomplicated outline to the inquisitive Zapotec Civilization. It provides some information regarding Zapotec and their lifestyle, past and present

Great book about the Zapotec Civilization.

This is certainly a great book about the Zapotec civilization. In this captivating guide, you will discover why Zapotec have gained such worldwide admiration over the many other civilizations that existed in Mesoamerica at the time.

Great book about the Zapotec civilization. I did not know much about them but this book filled in the holes. Excellent research and easy to understand stuff.

What a wonderful, all-inclusive book about the Zapotec Civilization. It is filled with great information and beautiful examples of ruins and artifacts from these civilizations. If you want to learn about these fascinating civilizations, this is the book to get.

Completely wonderful and thorough book on the complete aspects of not only the Zapotec Civilization, but also other and many other civilizations. All aspects of society is covered-family, trade, war, art, architecture, science and more. Excellent stuff that should make each reader want to visit one or more of these locations. Well done.

Good history book, a must listen.

I really liked this book.

A very good enjoyable audible. This is how archaeologists should grasp the readers to write most of the times. It delivers a great synopsis of the ancestries and the growth of Zapotec Civilization until the abandonment of its main site at Monte Alban ca 700 AD.