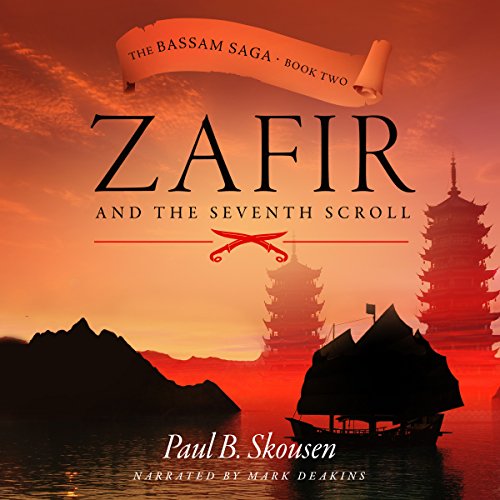 Zafir and the Seventh Scroll

Zafir and the Seventh Scroll

By: Paul B. Skousen
Narrated by: Mark Deakins

For those familiar with the adventures of Bassam and the Seven Secret Scrolls, this book will be a much-anticipated continuation of the story of this brave young man and his adventures as a traveling merchant. Those new to the story will find Bassam and his journeys in the Far East of long ago no less fascinating for its historical detail, and for Bassam's experiences and exploits.

An engaging old-fashioned adventure story, Zafir and the Seventh Scroll will take you to lands far away in time and place, as Bassam is called on to grow from a boy into a young man. The story begun in The Seven Secret Scrolls continues as Bassam rejoins his caravan, only to find his mentor, Zafir, gravely injured and facing death. Will Bassam be able to get him the help he needs - and will he ever learn what is in the seventh secret scroll, to complete his education and become the upstanding young leader Zafir sees in him?

Join Bassam on his journey to C'ina and beyond and see the world through his eyes. Get a glimpse of how people lived and worked in the long-ago world, what tools they used and what foods they ate. Look at the Great Wall of China as it is built, visit marketplaces and eateries, and sail the seas of the Far East. Learn about leadership with Bassam, as Zafir shows him that some people make the world better and richer, while others use great power to make it worse, and teaches him how to steer his own ship strong and true.

What listeners say about Zafir and the Seventh Scroll

It was nice but i feel he's drawing out the story

The story is good, and this was a good continuation to the first book, but i feel the author is just draaawing out the story. He writes well and all, but it's like he just figured out he struck gold and won't let it go. The abrupt ending on a new development and the "oh wait there's one more book coming"... This was just half a book, and i feel the story could have been nicely ended if the book was closer in length to the first. The main line of the plot, the scrolls and their meaning, is done. There is no logical need to put another book in this story. Just start another story in the same universe... This just reminds me of certain Wheel of time books: why close the story neatly in this book when you can drag it on to sell 3 more mediocre books?! It really seems like a last moment spin off to get more sales. The author seems talented, i'm sure he has more than just one story in him, so how about ending neatly and starting on something else. If he goes on like this we'll have another endless cycle of mediocre books written in the spirit of "oh and now we have to see what x did in the mean time, while generating another few loose ends to which i can come back in other books so i get more sales".

An excellent writer, his command of the written word is masterful. ... very well narrated, kept all of the characters alive.

The plot is well-developed, with descriptive language and colorful explanations. Highly recommend this series. The reading is exceptional!

This book is an excellent companion to the first

Would you listen to Zafir and the Seventh Scroll again? Why?

Yes. It is entertaining and clean. I can listen to it with my kids and they enjoy it as much as I do (well, the 7 year old, at least. The others are too young to pay attention.)

over all it was an excelent book.
narrator did an excelent job in my opinion.
It was a nice continuation of Bassam.
it didnt captivate me as much as the first book but after a few chapters I was hooked.
I dont want to give the ending away but it left me in suspence. cant wait for the last book.

Would you consider the audio edition of Zafir and the Seventh Scroll to be better than the print version?

The narration is superb. Well done!

All the voices. Very professional.

I first discovered this book and went back and listened to Bassam and the Seven Scrolls. It is a great standalone book but also goes well with the series.


Loved it! Can't wait for Book 3. Bassam's impossible dilemma from Book 1 finds a surprising escape and he's back on the trail, but things have changed. There's urgency in his race along the rivers of Ancient China, to find the ocean. Passage through the Kantoli Straits left me exhausted and exhilarated! Fawzi was his usual barbarous self. Ammar has the answers. And Zafir? Yes!

Beautiful writing, historical, brings to life the centuries' long project to build the Great Wall and the Emperor's madness behind the Terracotta soldiers and his massive underground tomb complex that rivals the Great Pyramid of Giza.

The Seventh Scroll is exquisitely presented. Gives interesting twist on goodness and cynicism in the world today and how to address broken faith and scornful people. The Seventh Scroll is the satisfying capstone to the six scrolls discovered in the first book. I listened to those chapters two more times, you'll see why.

This is a very interesting series. I thoroughly enjoyed this book. Very uplifting and entertaining.

This is a great story told by an amazing performer

This is a great story read be an amazing performer!! We can't wait for book three to be published. our Grandson loves it too!