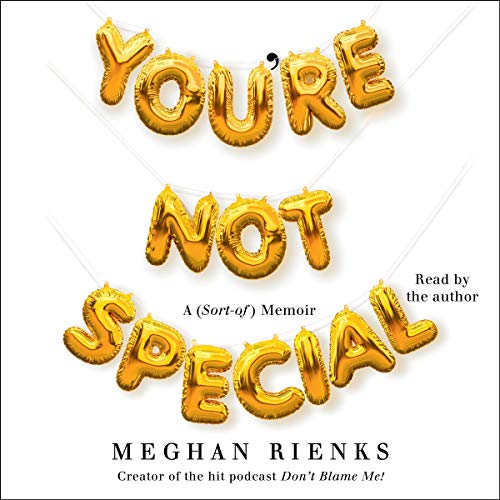 In her first-ever (sort of) memoir, the beloved actor and YouTube sensation gets personal about everything from mental health to drunken debaucheries.

As an only child raised in a town of less than 8,000 people and without a Starbucks in sight, Meghan Rienks has always been pretty good at entertaining herself. Then one day - cue the dramatic voice-over - her life changed forever.

On June 12, 2010, Meghan was diagnosed with mononucleosis. Mono is basically just a really bad case of the flu, right? Wrong. To a party-crazed 16-year-old, mono is social suicide. More than anything, it’s just plain boring. So, Meghan opened up her 2009 MacBook, used the webcam for something other than a bad Andy Warhol-style Photo Booth session, and recorded her first YouTube video. Since then, Meghan has shared the ups and downs of her life with the Internet, documenting her teenage years for the whole world to see.

Now that she’s (mostly) through her awkward stage, Meghan’s here to tell you that it gets better. You’re not alone in the thoughts you think. Sometimes a bad hair day feels worse than a punch in the gut and asking a boy out seems about as difficult as achieving that perfect dewy glow. But despite what you’ve been told, your problems are not unique, your struggles have taken form in everybody else’s life, too, and somebody else has felt the way you feel right at this very moment.

You’re not special. But you’re also not alone on the bumpy road to adulthood.

What listeners say about You're Not Special

absolutely loved it. well read, well performed, well written. 100% recommend, and also. it's so refreshing to have someone who is willing to dig deep and go beyond their experiences and actually open up on matters such as depression, anxiety and bullying. thanks Meghan, you're a Queen👸🏼

I’m not one for reading books so I purchased the audio version. So happy for you and your successes. Thank you for sharing your story!

Meghan is so fun and amazing to listen to, even when her story broke my heart. Everyone needs to listen/read this book. You’re welcome

This book is incredible

This book was thoughtfully written, yet reading it feels like talking to a best friend. It is raw, hilarious, heartbreaking, and inspiring. I recommend this book to anyone searching for personal growth

This is truly such and amazing book and story. All women and girls should read this. These things need to be said and they need to be heard. So grateful to Meghan for writing this and you should be so proud of yourself for doing it.

Best book I’ve read in a while

I was skeptical about this book being about a YouTube Girl and her life. I mean can’t I just watch her videos and see what she’s about? Nope. Not at all. This girl has so much relatable content for young adults. I found myself relating to her more and more and sitting in my shower using the words like a therapy session. 100% recommend for young adults and anyone who struggles with finding themselves or anxiety/depression. Light hearted and a great read.

i really loved it. it was funny and serious at the right times. it was also really helpfull

It's life. it's her life. It's everyone's life. It's not better than what I imagined, it's just what I imagined. Just life happening. The straightforwardness is incredibly engaging. I literally finished the audiobook super fast without even speeding it. I really need to buy the physical copy when I can.

I was so nervous about trying audiobooks for the first time but from what I can tell, this one was stellar! Meghan's narration was extremely entertaining & constantly kept me engaged in the story. I'd never really heard of Meghan Rienks before purchasing this audiobook, but decided to give it a try after hearing her interview on Candice King's & Kayla Swell's "Directionally Challenged" podcast. If you're on the fence, make a move & get this audiobook!

Wonderful book for a woman in their early twenties

This book was so great! I’m 21, and trying to navigate my way through life. Meghan is very relatable and wrote about things that pertain to me deeply. Thank you for the advice & ability to hear your stories Meghan!

I've been watching Meghan's videos for years and this is soooo amazing. ❤ She was really able to carry her voice throughout the story. O read along in my physical copy of the book while listening and enjoyed it so much. The addition of Mats narrating the parts that he wrote was a nice touch.

Everything I still need at 30 years old

I've been following meghan for over 7 years, I remember being a lonely 23 years old new mum and thinking I wish I could be her friend. My daughter is now 7 year old and not only is this book all the advice i wish I had at 15 years old it's still what I need at 30 years old and everything I want my beautiful daughter to know. Meghan is such a massive insperation and badass female.