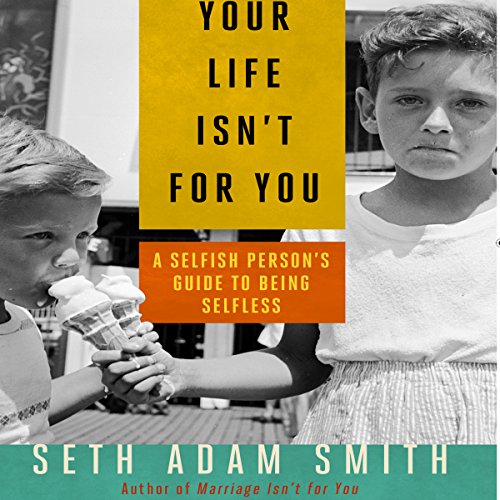 Your Life Isn't for You

In this book, Seth Adam Smith expands on the philosophy behind his extraordinarily popular blog post "Marriage Isn't for You" - which received over 30 million hits and has been translated into over 20 languages - and shares how living for others can enrich every aspect of your life, just as it has his. With a mix of humor, candor, and compassion, he reveals how, years before his marriage, his self-obsession led to a downward spiral of addiction and depression, culminating in a suicide attempt at the age of 20. Reflecting on the love and support he experienced in the aftermath, as well as on the lessons he learned from a difficult missionary stint in Russia, his time as a youth leader in the Arizona desert, his marriage, and even a story his father read to him as a child, he shares his deep conviction that the only way you can find your life is to give it away to others.

"A brilliantly written and insightful book. Seth's vulnerability and honesty are irresistible - pulling you in and opening your heart to the possibility of a life without walls." (Michael J. Merchant, President, ANASAZI Foundation)

What listeners say about Your Life Isn't for You

Highly recommended for those who struggle with Selfishness

Fantastic book for anyone who struggles with being selfish, on their path to selflessness. Short, sharp & very relate able.

This is an awesome different perspective book for introverts and extroverts. I myself am a introvert and the book is written from a introverts perspective it really made me reflect on my life I honestly thought I was not a selfish person until this read

It was more of a biography. It had good ideals, but I feel the subtitle doesn’t fit the book.

Not just for only children

This audiobook is a gem. I’m so moved by it. Just finished it and plan to restart it right away. I love his literary references and I plan to read those as well. Wonderfully put together, encouraging, and within reach.

Short read and to the point

I loved this book. It was a quick read. If you struggle with selfish ..this book can provide a few pointers. It doesn’t go into the reasons why one is selfish but goes into reasons why one shouldn’t be selfish.

better than I could have expected

this book was excellent. touching, inspiring, and we'll read. it was better than I could have expected.

This book is filled with so much hope, encouragement and happiness. It brings comfort and joy. Will definitely go through it again.