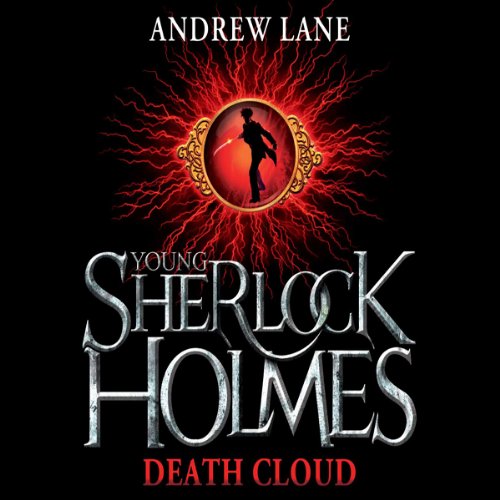 The world’s most famous detective. The most brilliant mind in fiction. But before he became the great detective, who was young Sherlock Holmes?

The year is 1868, and Sherlock Holmes is 14. His life is that of a perfectly ordinary army officer’s son: boarding school, good manners, a classical education – the backbone of the British Empire.

But all that is about to change. With his father suddenly posted to India, and his mother mysteriously ‘unwell’, Sherlock is sent to stay with his eccentric uncle and aunt in their vast house in Hampshire.

So begins a summer that leads Sherlock to uncover his first murder, a kidnap, corruption and a brilliantly sinister villain of exquisitely malign intent.

The Death Cloud is the first in a series of novels in which the iconic detective is reimagined as a brilliant, troubled and engaging teenager – creating unputdownable detective adventures that remain true to the spirit of the original books.

Sherlock Holmes? More like Alex Rider in the 1800s

Would you try another book written by Andrew Lane or narrated by Dan Stevens?

I have the next book of this series but haven't gone around listening to it yet. As for trying another book narrated by Dan Stevens, I would gladly do so as he is my most favourite narrator.

Would you recommend Young Sherlock Holmes: The Death Cloud to your friends? Why or why not?

I would recommend this book to young readers - probably my male students. It's got the things boys may be interested in - action, mystery, adventure, a pretty girl, etc.

Dan Stevens never disappoints me with his narration. He is simply brilliant in performing stories. His voice is clear, his reading pace is steady, he distinguishes character voices, and there's something about the way he reads that draws me into the story and makes me stay there until the end. He drew me into Michael Murpurgo's War Horse and Anthony Horowitz's Alex Rider series, he certainly kept me listening to this book even though it isn't as good as I thought it would be.

Did Young Sherlock Holmes: The Death Cloud inspire you to do anything?

If this is supposed to be a portrayal of Sherlock Holmes as a young teenager, it really doesn't feel like it. The whole book doesn't feel like a Sherlock Holmes mystery but rather a kind of Victorian Alex Rider as it comes across as something similar to the teenage spy book. Although it isn't entirely a bad thing, it isn't a good one either. I had mixed feelings about this book - but it didn't stop me from enjoying it to some extent.

My 10 year old really enjoyed this book - its exciting, easy listening with a great narrator. HOWEVER he did work out who dunnit and how before Young Sherlock Holmes did, so don't expect to be greatly challenged by the plot.

This is why I've only given it a 3 start rating. That and the fact it is less than 3 hrs long. It does feel really short for a mystery type novel, so despite the peril / blood / tension in parts it does seem aimed for the younger end of the tween market. If your child is reading Alex Ryder or Young James Bond (which mine is) this will definitely feel short.

My other gripe is that I didn't see the personality of the older Sherlock Holmes in this teenage boy. Other than being quite clever, there isnt any evidence of the brilliant, anti-social, slightly cold & arrogant adult Sherlock (might?) become. This would of course make young Sherlock more difficult to empathize with for the younger reader, as I can imagine young Sherlock as I see him would be a very difficult teenager indeed ... so think more Alex Rider, but in Victorian costume.