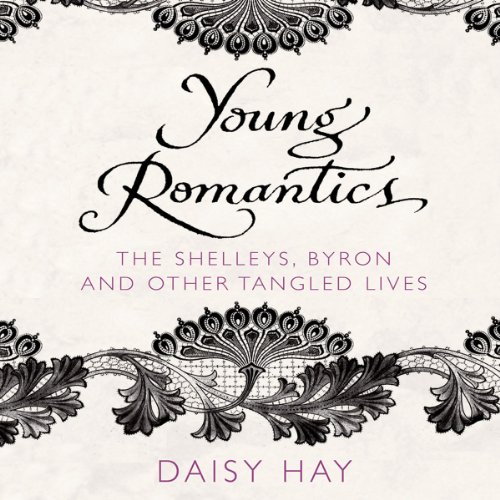 The Shelleys, Byron and Other Tangled Lives
By: Daisy Hay
Narrated by: Simon Vance
Length: 11 hrs and 50 mins
Categories: History, European
3 out of 5 stars 3.0 (1 rating)

Young Romantics tells the story of the interlinked lives of the young English Romantic poets from an entirely fresh perspective - celebrating their extreme youth and outsize yearning for friendship as well as their individuality and political radicalism.

The book focuses on the network of writers and readers who gathered around Percy Bysshe Shelley and the campaigning journalist Leigh Hunt. They included Lord Byron, John Keats, and Mary Shelley, as well as a host of fascinating lesser-known figures: Mary Shelley’s stepsister and Byron’s mistress, Claire Clairmont; Hunt’s botanist sister-in-law, Elizabeth Kent; the musician Vincent Novello; the painters Benjamin Haydon and Joseph Severn; and writers such as Charles and Mary Lamb, Thomas Love Peacock, and William Hazlitt. They were characterized by talent, idealism, and youthful ardor, and these qualities shaped and informed their politically oppositional stances - as did their chaotic family arrangements, which often left the young women, despite their talents, facing the consequences of the men’s philosophies.

In Young Romantics, Daisy Hay follows the group’s exploits, from its inception in Hunt’s prison cell in 1813 to its disintegration after Shelley’s premature death in 1822. It is an enthralling tale of love, betrayal, sacrifice, and friendship, all of which were played out against a background of political turbulence and intense literary creativity.

What listeners say about Young Romantics

very, very, boring. Maybe interesting to those doing literature, but to many this is too dense and very hard to concentrate on

Well written, well researched and the reach of the piece is wider than the usual suspects, giving a real sense of how the now identified group held (or not) together - great purchase.

Perfect for a TV series

If you could sum up Young Romantics in three words, what would they be?

The account of the struggles of the women, especially MaryShelley and Claire Clairmont, to stand up to the controlling men they loved, theirvery understanable reactions to the frequent deaths of their children, their ability to cope with nightmare journeys across Europe with little money, constant moves , and to welcome sudden visitors. In many ways they seemed modern, and as my granddaughters who read it said, "cool", so the characters were easy to identify with.

I would have preferred a woman narrator. Vance's voice sometimes grated

So,young, so idealistic, so impossible

I see it more as a 3-part TV series, which would allow the evolution of the complex relationships to be shown, than as a film

Highly recommend for anyone from the literary fanatic to someone with a passing curiosity in biography. Hay entwined the lives of the characters skilfully and the pace of writing is lively, detailed and full of character. Excellently researched and written.

Young Romantics by Daisy Hay is an interesting journey through the lives of some of poetry's most notorious characters. I have always been intrigued by the life of Byron and this biography really got his character across, as well as his relationships. I thought the way the lives interwove was told clearly and cleverly. The narrator was a good choice, it could have come across as a soulless reading but I think the narrator gave it warmth and he wasn't boring to listen to at all.