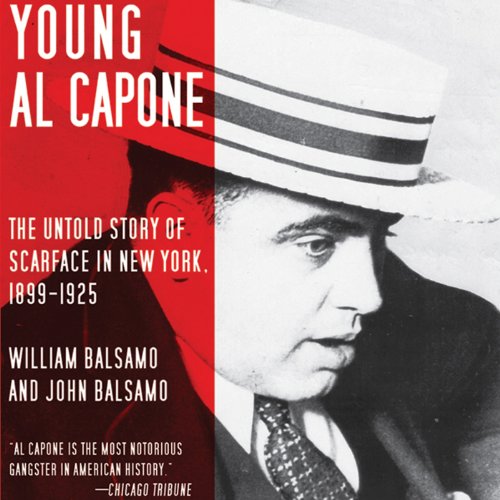 By: William Balsamo, John Balsamo
Narrated by: Daniel May

Before Al Capone became known as one of America's most feared gangsters, he was just another thug on the streets of Brooklyn. Using a host of new primary documents and interviews with family relations, John and WIlliam Balsamo are able to share the never-before-told true story of Al Capone's early years in New York City. Daniel May's performance of this biography adds excitment to an already intriguing chapter from the bloody and real annals of gangster history.

The first biography of Capone to focus on his youth in Brooklyn and the events that shaped him into one of history’s most notorious criminals.

Many people are familiar with the story of Al Capone, the legendary Chicago gangster best known for orchestrating the St. Valentine’s Day Massacre. But few are aware that Capone’s remarkable story began in the Navy Yard section of Brooklyn, New York. Tutored by the likes of infamous mobsters Johnny Torrio and Frankie Yale, young Capone’s disquieting demeanor, combined with the “technical advice” he learned from these shady teachers, contributed to the molding of a brutal criminal whose pseudonym, “Scarface”, evoked fascination throughout the world.

Despite the best efforts of previous biographers lacking true insider’s access, details about Capone’s early years have, until now, mostly been shrouded in mystery. With access gained through invaluable familial connections, the authors were able to open the previously sealed mouths of Capone’s known living associates. Collecting information through these interviews and never-before-published documents, the life of young Al Capone at last came into focus.

Among the many revelations in Young Al Capone are new details about the brutal Halloween Night murder of rival gangster 'Wild Bill' Lovett, grisly details on how Capone and his Black Hand crew cleverly planned the shootout and barbaric hatchet slaying of White Hand boss Richard 'Peg Leg' Lonergan, insight into the dramatic incident that forced Capone to leave New York, and much more.

Is this fiction or non-fiction?

It is hard to take this book seriously. It seems to present itself as a biography. But, it is written as fiction. I don’t like it. Perhaps it should have been written as a novel?

Before he made it big

I have read quite a variety of books regarding Mob history. I was interested in listening to this one as it specifically stated it would be taking you through the life of Capone, PRIOR to "when he made it big".

The history was entertaining and engaging. The narrator was what made the book for me. He did an excellent job of narrating. I thoroughly enjoyed every minute of it.

A great tale of his youth, when Alcatraz bound

What made the experience of listening to Young Al Capone the most enjoyable?

The history of early New York

It was dramatic but rang true.

Excellent good tone and a touch of accent

"And so, on to Alcatraz"

I am Australian but have visited Alcatraz many times, my work took me to Chicago so would like to read any novel of his later life in the Windy City

I enjoyed the voices and the variety of stories that was packed in. I did not enjoy the jumping from one decade back to another decade. Ok read or should I say listen.

EXCELLENT BOOK LOVED IT .
I'VE WATCHED MANY DOCUMENTARIES ON AL CAPONE AND THIS BOOK WAS JUST AS GOOD AS THEM.

The Book is alive

Would you listen to Young Al Capone again? Why?

Brings facts to life in this rollercoaster true story