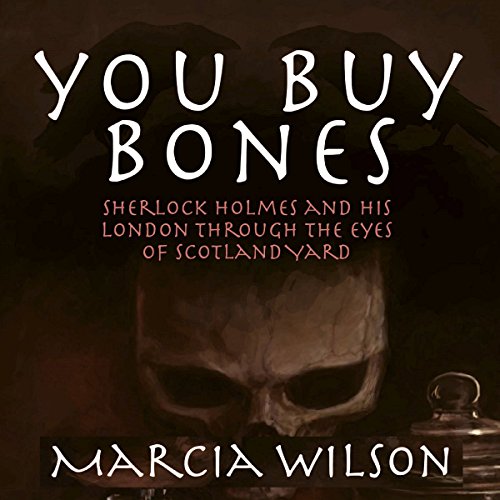 You Buy Bones: Sherlock Holmes and his London Through the Eyes of Scotland Yard

"Mr. Holmes is an amateur, Hopkins." Lestrade was smiling around the stem of his pipe as he spoke. Hopkins could hear it. "Not a man who works well in teams, he. He still trusts Dr. Watson not to lie to him...and Dr. Watson's pulled some whoppers to save his skinny neck in the past." Lestrade was still smiling. "Not that that's not the most interesting thing about those fellows. I could tell you some stories about them, Stanley...oh, I could tell you stories..."

Meet Sherlock Holmes through the eyes of his fellow lodger once again... and meet both through the eyes of the Yard - especially those who saw them the most: Inspectors Lestrade, Gregson, and Bradstreet. From Montague Street to a supposedly straightforward case of smuggling in Cornwall, Scotland Yard saw more than the disconcerting and dazzling private detective: it also saw an admirable and steadfast British soldier who shared their need for justice. Doctor John Watson may call himself unremarkable, but the Yard would disagree...

What listeners say about You Buy Bones: Sherlock Holmes and his London Through the Eyes of Scotland Yard

A Bit of Respect for the Working Detectives!

Would you consider the audio edition of You Buy Bones: Sherlock Holmes and his London Through the Eyes of Scotland Yard to be better than the print version?

This was my first exposure to the novel, but I can't imagine the voice in my head being any more enjoyable than listening to Dominic Lopez reading this! The narrator is spot on!

Lestrade! In many adaptations (and some of Conan Doyle's own work) Lestrade gets underplayed as a foil for Holmes. But here, Lestrade comes off as an admirable man. I never would have guessed that Lestrade could be interesting as a lead character, but Marcia Wilson made him a hero in his own right!

Mr. Lopez has a voice that is infinitely easy to listen to. Also, he gives each character his/her own "voice", but this never becomes distracting. The switches between characters and narration flow seamlessly, until you reach the end of yet another chapter and you look at the time and realize you need to go to bed eventually.

There are several moments that moved me, but when the detectives find Watson's notes and realize that he is writing a book about Holmes, and the way each of them reacts -- particularly Lestrade -- felt like a revelation! It felt like Marcia Wilson had figured out how to remain true to Conan Doyle's original vision, but also flesh out the world believably, and add a certain humanity (and likability) to characters whom we have never before bothered to consider in any depth.

I was a bit skittish about this concept. I feared that the author might be trying to rewrite or ret-con Holmes and his world. But I was quickly reassured that Wilson loves Holmes and his world just as much as I do, and surprised at just how much she was able to make me love ancillary characters I had always taken for granted!

What made the experience of listening to You Buy Bones: Sherlock Holmes and his London Through the Eyes of Scotland Yard the most enjoyable?

This is a wonderful journey into the world around and beyond Sherlock Holmes. The story is rich with detail while it explores a mystery from the perspective of Dr. Watson and Insp. Lestrade. It is a unique perspective on the world usually only seen through Watson'c chronicles of Holmes.

What does Dominic Lopez bring to the story that you wouldn’t experience if you just read the book?

Well read with clear characters and an accent that is atmospheric without being distracting to my American ears.

I thought it was a Sherlock Holmes mystery but it was more Watson this time but I didn't feel slighted at all. Watson did his own superb job of it!

If you were dying for Sherlock Holmes as the featured character you will be sorely disappointed. The book mainly features very damaged, recently returned war veteran, Major/Doctor John Watson as seen through the eyes of Lestrade, Bradstreet and the yard. The stories are different but the narration is not the best. There are lines repeated, words mispronounced and a most of it delivered in a droning monotone that was annoying. I am not a fan of Dominic Lopez. I did like the in depth characterization of Watson as I have a soft spot for him. Don't waste your credit on this one.

This audio comprises a few short stories to set the scene, then the novella, 'You Buy Bones'. The focus is on the Scotland Yarders, Lestrade and Bradstreet in particular, as well as the underappreciated Doctor John Watson. Sherlock Holmes is very much a secondary character in these stories, with the focus being on character pieces involving those who orbit him in the original stories. For a story that intends to show Watson (and to a lesser extent Holmes) through the eyes of the Scotland Yarders, I found it strange that it was written in the third person, rather than being a first person account by Lestrade, and Dominic Lopez's narration was a little one-note, but these were minor quibbbles.