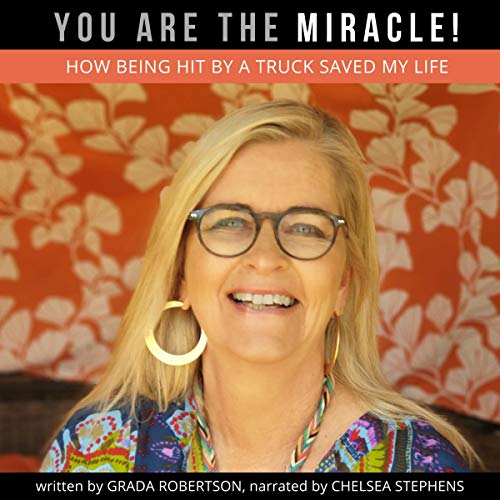 You Are the Miracle!

Did the accident that almost took Grada Robertson’s life, actually save her life?

Grada Robertson always considered herself to be blessed.

Grada was only 17 years old when she met her soul mate, Peter. By 19 she was married and had migrated from Holland to live in Peter’s homeland, Tasmania, Australia.

Grada lived her dream - homesteading at the "back of beyond" with the love of her life, six children, a menagerie of farm animals, and surrounded by pure, uninterrupted nature.

With an ever-curious mind, Grada studied at every opportunity. In 2000, she and Peter opened a wellness clinic in their back yard. Before long she became known as the "Sherlock Holmes of Healing" in her local community.

At the pinnacle of her life, Grada was hit by a truck - literally.

During the near-death experience that followed, Grada had to make the decision to return to her body. She did, just in the nick of time, only to find that she was injured so badly it would take every ounce of her substantial willpower to recover. In the months that followed, Grada’s body and mind were riddled with so much suffering that death sometimes seemed a welcome option.

As she began exploring her early life, Grada slowly realized the accident wasn’t a coincidence, but that she had subconsciously created similar circumstances to her childhood.

From working with clients, Grada knew that physical, spiritual, and emotional abuse all have devastating effects both short and long-term. What she hadn’t realized was that her own childhood issues hadn’t been left behind in Holland, they had simply gone underground. If she refused to face them now she would die.

Grada stunned everyone with the speed of her recovery, returning to work six months after the accident. She now teaches her mindset and energy medicine to help her thousands of clients recover from the most challenging conditions and turn their pain into personal power.

What listeners say about You Are the Miracle!