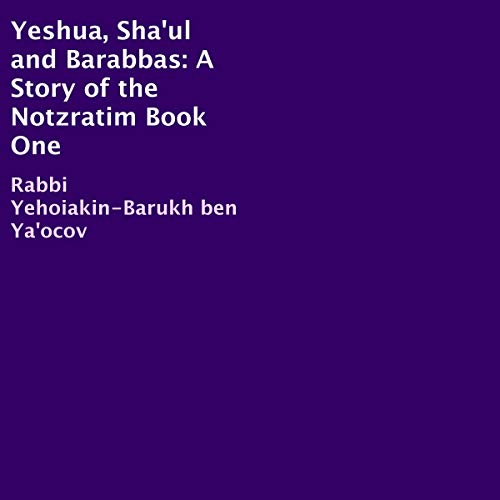 This audiobook is for all seekers who wish to understand the life and works of Rav Sha’ul, Yeshua the Messiah, and the possible role of Barabbas, from within the context of true Biblical Judaism and the times on which they lived, I wish to say that while this is a work of historical fiction, based upon some true facts, the story has been dramatized and certain traditions brought to life as facts, as well as adventurous but fictitious incidents in the lives of the main characters, in order to place the people back into the Jewish culture from which they came, letting the listener see the true essence of what they taught and continue to teach us, is here in its full grandeur.

To answer any critics I say, that my dramatization of the story is no less valid than all of the movies, such as Quo Vadis, AD, Jesus of Nazareth, Paul the Apostle, The Greatest Story Ever Told, The Robe, Barabbas, and many others, as well as great books such as Ben Hur, and Quo Vadis, all which are works of historical fiction intended to enrich the faith of all people who devote themselves to the Judaeo-Christian religious traditions.

This story is told by a man talking to a group of people in a prison cell in Rome in the year 64 CE, and the story teller is Luke the Evangelist, the Greek Doctor who had converted to Yeshua’s Judaism. This work is intended to redeem the maligned character of Miriam of Magdala (Mary Magdalene or Mary the Tower) who was never a prostitute, but the closest out of all of Rabban Yeshua’s Talmidim. It is fairly certain that all of these men were married, and while the names of these strong and courageous Jewish women have been lost to history, due to I believe the censorship of the so-called church fathers as well as the Jewish culture of the time which in many cases, marginalised the role of women.

It is my prayer that this audiobook series brings the story of the Notzratim to life in a Jewish character for the listener and that all who listen to this see the story in a grand, new, and glorious light.

What listeners say about Yeshua, Sha'ul and Barabbas