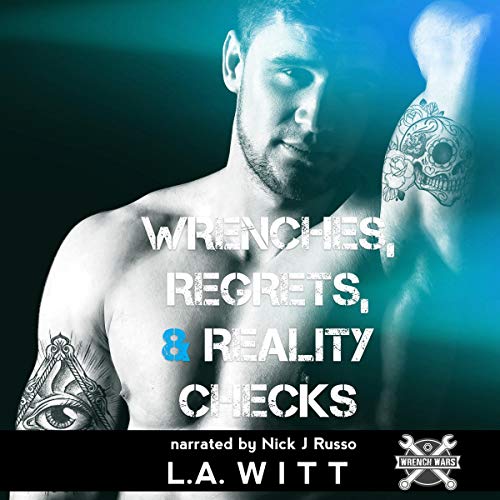 When Reggie’s garage became part of a popular reality show, business went through the roof. And he supposes having his shop in the black is a fair trade for jumping through the network’s hoops.

As the show’s lowest-ranking producer, Wes is tasked with proposing a new spin-off show to Reggie. The sexy mechanic makes him sweat on a normal day, but this time, Wes is holding cards he can’t show. With execs breathing down his neck, he’s expected to pitch a show Reggie will never agree to do, even if his rejection puts his existing show on the line.

The network is counting on Reggie refusing to sign. But they’re not counting on their messenger falling for the man they’re trying to fire.

I love Nick Russo! Not my favorite by LA Witt

I haven’t read book one in this series, but I did read book two and I’m a big LA Witt fan. I love blue collar MCs and mechanics especially turn my key. (Look what I did there!) The cover is really hot and while I was a bit leery of the reality TV, I was really hoping that the mechanic part of this story would negate the Hollywood drama. Unfortunately, it didn’t.

I admit to a definite bias against reality TV and Hollywood storylines. The fakeness of Hollywood and actors and the BS they do for their work make them unappealing as characters, so I avoid those storylines. If those are things you like, then please take my review with a big grain of salt, because it might just be up your alley. The takeaway feeling I got by the end, was a temporary fix to the central problem and a tepid HFN. I don’t want to give away any plot points, but even at the end of the story I was still worried about the garage and it’s future, I was uncertain what sort of career Wes was going to have, and most importantly, I was worried that our MCs weren’t really going to go the distance– both in terms of geography and personal life plans. Perhaps if the story had been longer I might have been convinced, but given the story's brevity – where we’re left is still on pretty shaky ground.


The writing was good, the romantic times were smokin’ hot, but the feels just weren’t there for me. I was left kind of anxious at the end of this story and I don’t like that feeling! I admit to wanting it all wrapped up in a pretty package (or at least looking like it’s pretty certain to be all wrapped up in a pretty package) and this just didn’t convince me. If you’re a fan of the series (I think there’s a lot of book one referenced in this), a fan of reality TV/Hollywood angst, if you don’t mind a romance with less “feels” in it but plenty of “sweaty, hot, blue collar meets white collar man on man” times – this is the book for you!

Nick is awesome – as always. He really brought a lot to this story and made it more enjoyable than simply reading it.