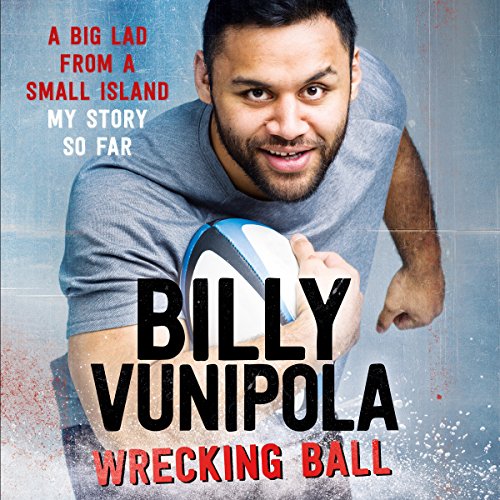 Voted Rugby Book of the Year at the 2018 Sports Book Awards.

Wrecking Ball is a captivating and humorous memoir by Billy Vunipola, one of the stars of England's recent rugby renaissance, and will be enjoyed by those who have read the recent autobiographies by Jonny Wilkinson, Brian O'Driscoll, Dan Carter and Paul O'Connell.

Standing at 6 feet 2 inches and weighing almost 20 stone, Billy is a rampaging and unmissable presence on the rugby pitch, for both club and country.

Wrecking Ball is his captivating story so far, chronicling his remarkable personal odyssey of 10,000 miles, from the tiny Tongan village of Longo Longo to the imposing vastness of Twickenham.

Join Billy on his journey from the year-round sunshine of Tonga to the bitter cold of a British winter, from his favourite Pontypool kebab shop to finding himself eating broccoli for breakfast, and from carefree childhood games in the middle of the Pacific to the serious business of playing professional rugby in Europe.

Wrecking Ball is a wonderfully eccentric and witty book, written with bags of charm. It captures Billy's colourful family and upbringing, and creates a rounded and fascinating portrait of a young man finding his feet as a modern English rugby player.

What listeners say about Wrecking Ball

Very funny and an eye opener

I've never read / listened to a book about rugby before but the excitement ahead of the 6 nations led me to picking this up and learning more about one of England's key players. Really well read and a very honest portrait of one of the best players around at the moment. Funny and lighthearted even when dealing with some of the more sensitive issues although the story does hop about quite a bit and lacks a bit of structure.

Funny book with loads of funny and crazy story stories about his time growing up in the UK as a poor kid from Tonga who loved rugby. It’s a great autobiography telling you all the obstacles Billy had to overcome to be the man he is today. I would recommend this book to any rugby fan around the world.

What a little twat Billy was

What a read I loved this book
(Sweet) one Billy? Can't wait for the next half of your life

This is one of the best books I’ve listened to and has really helped me as currently going through some injury’s...

I enjoyed listening to Billy’s story. It was extremely interesting listening and learning of his heritage. Loved to hear about the Tongan history and upbringing. Walking through peoples houses to cut the distance down made me chuckle. Some of the book was repetitive and a bit frustrating . I understood how the story was trying to be told, however I very nearly switched off. Perhaps this was to do with the narrator and not billy. Enjoyed it, however people with less patience may not.

Good Listen for a Rugby Fan

Good stories from one of England's rugby stars full of entertaining views on Tongan/English culture.

Nice book. You can't help but like Billy and his family and 'Wrecking Ball' is a good insight into what it's like to come from a small Rugby playing country like Tonga to a totally different life in the UK. I hope that the book will be updated in the future - the rest of his career will be an interesting story and would have to include the controversial events at Saracens.

Billy Vunipola is a great sportsman, and this audio book brought a new element into his life, from growing up in a small village, to his current place as a premier player in the rugby world.
I struggled with the narrator though - just didn't seem to fit with the man (if that makes sense) and for me this did detract from the story a little.
Nevertheless, a great listen, and well worth the time.

Sorry - not for me

I love rugby, Billy is a fantastic player and am sure his story is very interesting but I do not believe his writing skills match up. I tried hard but gave up after a couple of chapters.