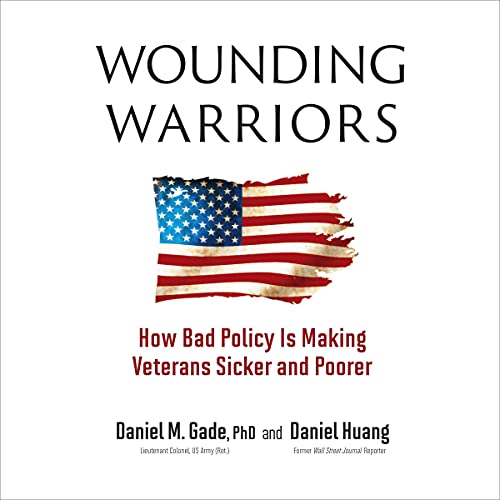 According to General Jim Mattis, former US Secretary of Defense, Wounding Warriors is “an unflinching appraisal…a must-read for those committed to caring for our Veterans who have borne the battle.”

Indeed, Wounding Warriors: How Bad Policy Is Making Veterans Sicker and Poorer is a transformational effort of research into the Department of Veterans Affairs and the US military. Authors Daniel Gade - retired US Army lieutenant colonel, professor, public policy leader, and former US Senate candidate from Virginia - and former Wall Street Journal Reporter Daniel Huang interviewed dozens of veterans who saw the perverse structure of incentives within the VA from the inside. The authors also combed through years of literature and compiled a wealth of data that demonstrates beyond all reasonable doubt that our system of caring for veterans, post-military, is broken. As former US Secretary of Defense Jim Mattis said in his review of the book, it is “an unflinching appraisal” of how the Department of Veterans Affairs rewards disingenuity and dishonesty.

Wounding Warriors, however, does more than identify flaws in how veterans are cared for after their time in service is up. It also outlines solutions that would move veterans to take a healthy approach to post-military life. Wounding Warriors is a must-listen for veterans, their families, and anyone who has felt subjected to a corrupt system of bad incentives.

What listeners say about Wounding Warriors

Could have cut out 2 hours

Feel like a lot of the examples of abuse where the same story. Unless I missed it I did not hear the about how if you are rated at 100% permanent and total you still work full time at a job.
That’s the part of VA that confused me. I though 100% meant you cannot work full time