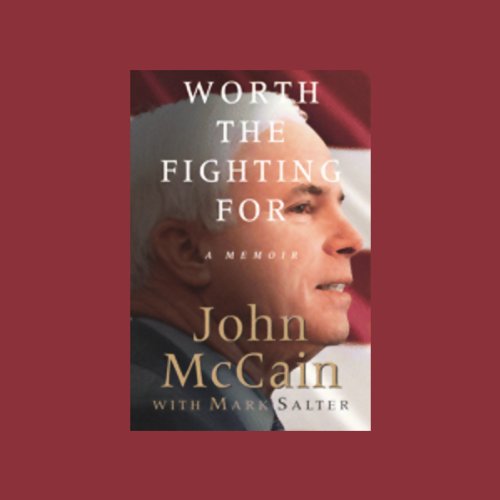 The Education of an American Maverick, and the Heroes Who Inspired Him
By: John McCain, Mark Salter
Narrated by: Dan Cashman
Length: 18 hrs and 28 mins
Categories: Biographies & Memoirs, Memoirs
5 out of 5 stars 5.0 (1 rating)

Senator John McCain tells the story of his great American journey, from the U.S. Navy to his electrifying campaign for the presidency in 2000, interwoven with heartfelt portraits of the mavericks who have inspired him through the years.

After five and a half years as a prisoner of war in Vietnam, naval aviator John McCain returned home a changed man. Regaining his health and flight-eligibility status, he resumed his military career, commanding carrier pilots and serving as the navy’s liaison to what is sometimes ironically called the world’s most exclusive club, the United States Senate. Accompanying Senators John Tower and Henry “Scoop” Jackson on international trips, McCain began his political education in the company of two masters, leaders whose standards he would strive to maintain upon his election to the U.S. Congress. There, he learned valuable lessons in cooperation from a good-humored congressman from the other party, Morris Udall.

In 1986, McCain was elected to the U.S. Senate, inheriting the seat of another role model, Barry Goldwater. During his time in public office, McCain has seen acts of principle and acts of craven self-interest. He describes both extremes in these pages, with his characteristic straight talk and humor. He writes honestly of the lowest point in his career, the Keating Five savings and loan debacle, as well as his triumphant moments—his return to Vietnam and his efforts to normalize relations between the U.S. and Vietnamese governments; his fight for campaign finance reform; and his galvanizing bid for the presidency in 2000.

Writes McCain: “A rebel without a cause is just a punk. Whatever you’re called—rebel, unorthodox, nonconformist, radical—it’s all self-indulgence without a good cause to give your life meaning.”

This is the story of McCain’s causes, the people who made him do it, and the meaning he found.

Worth the Fighting For reminds us of what’s best in America, and in ourselves.

“[An] unpredictable, outspoken memoir . . . a testimonial to heroism from someone who has first-hand knowledge of what it takes.” (The New York Times)

“When [John] McCain writes of people and patriotism, his pages shine with a devotion, a loving awe, that makes Worth the Fighting For worth the shelling out for. . . . McCain the man remains one of the most inspiring public figures of his generation.” (The Washington Post)

"More inspirational stories from McCain, following his Faith of My Fathers." (Library Journal)

McCain is an admirable man of remarkable character. But this book is overly long, full of self justification, and not particularly well read. It has some interesting contemporary history, but would have been much more compelling (and made the author much more sympathetic) if it had given us more insight into his military career and had less about how who disappointed him in Washington.

Get to know McCain

I read this because I wanted to know more about McCain. I do know more about him. I did like some of his stories and his thoughts. Generally, you read a book and like the writer better than before you read the book. Interestingly, I read McCain's description of himself and came away liking him less.

<br />a bit boring, but for some still worth it

a bit boring for me. I usually love his books but it seems more like a book for honoring other individuals.