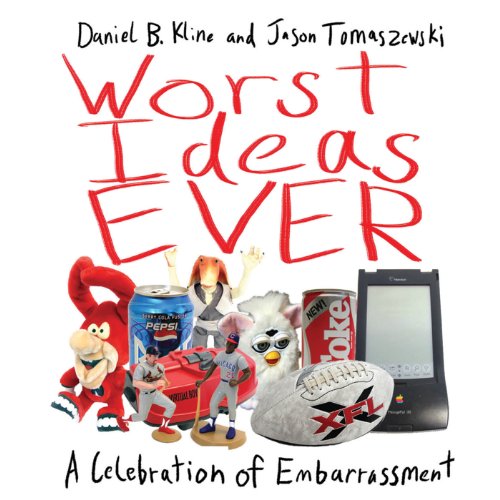 Listeners smarting from a recent humiliation can take solace in Worst Ideas Ever: A Celebration of Embarrassment, a compendium of the biggest blunders in recent history. Some of the wretched ideas listed here will live forever in infamy for their negative example - say, New Coke or Bernie Madoff. Others are rescued from obscurity by authors Daniel Kline and Jason Tomaszewski, like the idea to put record players in Chevy cars, or Cop Rock, the (thankfully) forgotten musical police procedural by the creator of NYPD Blue. Narrator Patrick Lawlor's droll, winking descriptions of the worst that sports, entertainment, and pop culture have to offer is an antidote to a bad day. Those prone to noisy laughter might want to listen to this one in private.

Mistakes so big they seem like fodder for The Onion - but they really happened!

From memorable disasters such as New Coke, the XFL, and Tiger Woods’ marriage to less-remembered failures such as Yugo, Cop Rock, and Microsoft’s BOB, Worst Ideas Ever revisits history’s biggest blunders. Whether it’s a pop culture failure the likes of Dennis Miller’s disastrous run on Monday Night Football, a political one such as John Edwards’ odd decision to run for president while cheating on his cancer-stricken wife, or a technological misstep such as Apple’s Newton OS, Worst Ideas Ever uncovers the ridiculous stories behind mistakes so huge, you’ll have to constantly remind yourself that they actually happened.

Moving from Mariah Carey’s “performance” in Glitter to the Minnesota Vikings decision to trade away their future for an aging Herschel Walker, Worst Ideas Ever offers the real stories behind some of the dumbest things ever done. Whether it was ego (Michael Jordan leaving basketball for baseball), greed (nobody questioning their impossibly high returns when investing with Bernie Madoff) or simple stupidity (Jay Leno moving to 10 p.m.), Worst Ideas Ever brings it all back in hilarious detail.

I enjoyed this worst ideas ever audiobook. It made me feel better about myself. Thanks for putting this together. Would recommend.

Dumb ideas and a dumb book about the ideas. Not funny. Not entertaining. Tedious. I'd avoid this one.

Described as a funny laugh out loud book....NOT!!!

This book was one of the worst ideas every

This book has NO insights, just anecdotal stories. It’s easy in hindsight to point out some unsuccessful events but little sight as to why – what should they have done differently, what was the flaw in their thinking. Jimi Heselden was kill driving his Segway off a cliff so it’s a bad idea – but Thomas Selfridge, one of the first passengers was kill in a flight, was the airplane a bad idea? New Coke was a classic stinker, but Pepsi did the same thing with Crystal Pepsi – what were they thinking, I don’t know, the book doesn’t go there. The humor wears thin quickly, assertions are made without foundations. I didn’t enjoy at all.

Anyone who has an ounce of marketing or product knowledge will have their stomach turned by the lack of research and stupid conclusions drawn for the sake of flat humor in this book.

I mean, yeah, it's fine to point out that the "new coke" roll out was botched, but to not point out that coke had years of taste panel data saying that the new coke was wildly preferred over classic coke is a little disingenuous (not to mention that coke was losing ground to Pepsi very fast). To say that customer base dropped during the Taco Bell dog adverts is just wrong...yes it fell in the last couple of quarters before the ads were discontinued, but skyrocketed before then. To call the Dominos Pizza "Noid" add a mistake is just idiotic...given that it was wildly successful, so much so that the company has brought the character back in limited ways multiple times...including an arguably very successful Facebook push in 2011.

I'll stop there. Even at a 99 cent special, this book was a waste.

Another Worst Idea Ever

What would have made Worst Ideas Ever better?

I don't think anything could have improved this book. It was extremely boring and redundant. Mindless gibberish and I'm 'embarrassed' that I wasted my time.

Has Worst Ideas Ever turned you off from other books in this genre?

Oh yes, most definitely. I would reconsider before purchasing another book along these lines. The only saving grace of this book is that it was only .99 cents, which makes this book very self explanatory.

If there were any redeeming 'qualities' in this book, I missed them. It was completely lacking in 'quality'.

Thank goodness it was only .99 cents and it didn't involve ANY mindfulness.
You asked.

Most boring book ever

What would have made Worst Ideas Ever better?

Engaging/entertaining stories. There must be some bad worst ideas ever.

What could Daniel Kline and Jason Tomaszewski have done to make this a more enjoyable book for you?

I'm glad I only paid 0.99 for this on special. I listened to it and within ten minutes concluded that either I was incredibly discerning or it was incredibly uninteresting. I'm not too discerning, so...

This is one of the stupidest books I've ever read. Some of the ideas aren't even bad ideas, and none of the are the "worst ideas ever". At some points the author even provides arguments for why the ideas wasn't a bad idea at all.

DO NOT LISTEN TO THIS BOOK

Too heavy on entertainment, media and sports

I got this as a "Daily Deal" for 99 cents, so I can't complain too much. I'm just glad I didn't pay a full credit for it.

Judging by the description and title, I anticipated this to be about products, services or other ideas that turned out to be bad. I also fell for the cliche of judging a book by it's cover (thinking the cover would represent it's content). While the book does cover some of these topics, a HUGE chunk of the book is about entertainers, media/broadcasting, TV, movies and sports/athletes. This is not what I thought the book would be about so I ended up skipping several chapters.

If you get this for the price of 99 cents, go for it. But don't pay more than that or especially a full credit.

Dry narration of anecdotal stories of ideas that maybe really weren't as bad as they tried to portray. The New Coke story is predictable and has been worn into a cliché. Other stories are of variable interest, but absolutely nothing laugh-out-loud funny. Not entertaining to listen to, perhaps of mild interest to keep the book in the bathroom to grab a couple of factoids in short sessions.