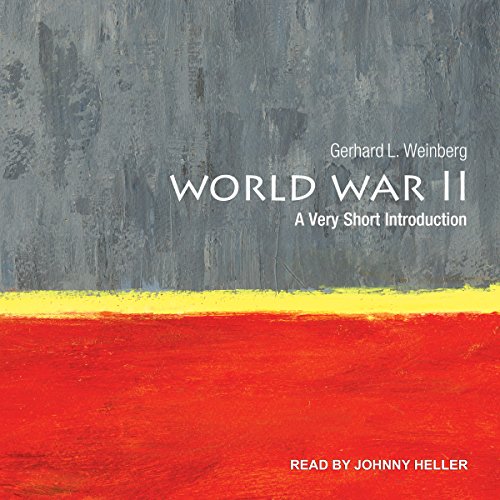 In this Very Short Introduction, Gerhard L. Weinberg provides an introduction to the origins, course, and impact of the war on those who fought and the ordinary citizens who lived through it. Starting by looking at the inter-war years and the German invasion of Poland in September 1939, he examines how the war progressed by examining a number of key events, including the war in the West in 1940, Barbarossa, the German Invasion of the Soviet Union, the expansion of Japan's war with China, developments on the home front, and the Allied victory from 1944-45. Exploring the costs and effects of the war, Weinberg concludes by considering the long-lasting mark World War II has left on society today.

Overdressed... and over here

This is a solid, if bland, 30,000 ft summary of a large, massive, well-examined subject.

I didn't expect much beyond this. It would be difficult to do a 150 page VSI for the Battle of Stalingrad, the African Campaign, or the Battle of Okinawa. So, covering both the European and Pacific theatres, etc., creates a VSI that can't even begin to get beyond the superficial on anything. It is a book, however, that would be useful as a one-day survey of the war at the high school, or Freshman college level, BEFORE diving deeper into a granular exploration of specific aspect of the war.

By its very superficiality (which is necessary by the size of the subject) it also reminded me to be wary of all VSIs (and historical summaries). While WWII is an historical subject where an amateur historian can feel comfortable feeling she knows the general territory enough to perhaps not need a VSI (thus both appreciate it and desparage it at the same time), other subjects covered by VSI aren't necessarily as well-traveled, or understood, so must also come with a higher degree of, what? Skepticism?

Anyway, Weinberg covered a difficult subject well. He didn't blow himself up anywhere. That I, an amateur, could see.

Broad in scope but curiously bloodless

Gerhard Weinberg has written a concise and informative, but not especially gripping, history of the Second World War.

As you might expect, the first two chapters lay the groundwork. One describes the aftermath of the Great War, especially on Germany: many provisions of the Treaty of Versailles were resented. Weinberg credits the negotiators of 1919 with an honest effort to grapple with a problem never seen before: the shift in the definition of statehood from loyalty to a dynasty to loyalty to “the nation.” Their solution — embracing national self-determination by plebiscite — failed, but their intentions were honorable. (He does not, unfortunately, have much to say about the economic wreckage that followed the war.)

The second chapter traces the beginning of Hitler’s plan for world domination.

After that, it's a whirlwind tour of the battlefields. Weinberg gives a broad summary of the developing action. One surprise (for me) was the pressure Germany put on Japan to enter the war in 1941. Although the Japanese plans were already well in hand, and developed without input from Germany, Weinberg makes it sound like they moved up their start date in response to German pressure.

He devotes a fair amount of attention to battlefronts outside Western Europe. The invasion of Russia and the subsequent retreat of the German army is given its due; so is the island-hopping of the Pacific theater. (While the conflict in China is covered briefly, less attention is given to action in the Balkans and in South Asia.)

Ilt's an excellent, well-proportioned narrative, but from my perspective it seems lacking in human interest. When you're trying to compress the greatest conflict in the history of the world into four hours, something has to give, and here it's mostly the personalities of the participants — and any sense of the conflict on a human scale. Weinberg includes a chapter about the home front, but he still doesn't convey a sense of the terrible suffering involved. The destruction of Dresden, Hiroshima, Nagasaki, and other cities get a brief mention, but Weinberg doesn't pause to let you react. When he documents the appalling number of casualties of the war, especially in Russia, there's little sense of what it means in terms of human suffering. Twenty million? Thirty million? It's just a number. (On the other hand, he has a refreshing willingness to call the wholesale slaughter of civilians what it was: cold-blooded murder.)

I realize that my disappointment on this score says more about my expectations than it does about the book. Weinberg didn't write the kind of book about World War II that I wanted to read. (Max Hastings came closer, but his book is 8 times longer.) In fairness, that shouldn't count against him. He set out to write a clear, factual, “very short introduction” to the war, and that's what he's done. If that's what you're looking for, this is an excellent choice. It's a book you can listen to in an afternoon and come away with a sense of the basics.

Johnny Heller does a great job with the narration.