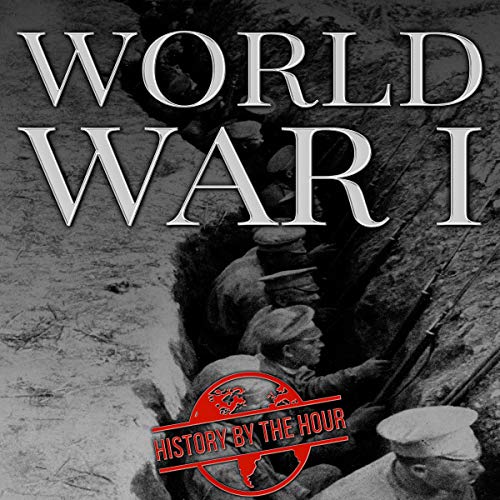 By: History by the Hour
Narrated by: Rory Young
Free with 30-day trial

In this one-hour history book, discover the main events that led to World War I and how this first global conflict unfold from the Western front, to Africa, the Middle East, and Asia as it became one of the bloodiest war of all time.

It was dubbed “the war to end all wars,” but as anyone alive today can clearly attest, this was most certainly not the case. World War I was indeed an ending point in world history, but rather than ending wars, it could be said to be the war that ended the “fraternity of wars.” Before World War I, many in positions of power viewed violent warfare to be an almost chivalry test of world powers, but the blood-soaked trenches of World War I revealed to the world what war on a massive scale truly was - absolute horror. World War I was the first time that warfare had been mechanized and fine-tuned to this degree.

This war was the fruit of an industrial capacity for death that had been unleashed upon the Earth. It was hard to consider it chivalry or valor when men were being gassed to death as though they were nothing more than common vermin. The only thing that really ended as a consequence of World War I was the idea that war could be used as an effective means to solve international disagreements - though sadly, many still try. From the trenches of Verdun to the shores of Gallipoli, all the heroes both sung and unsung, here in this book we will explore the full tragedy and the horror that transpired during World War One.

In this short-listen one hour book, you will know everything you need to know about World War I and how this bloody war changed World history.

What listeners say about World War I

A brief but concise narrative of what was known then as wars are now just.