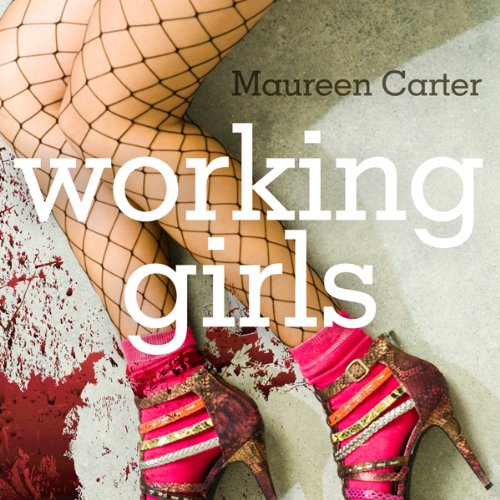 Fifteen years old…brutalised…dumped in a park…throat slashed…. Schoolgirl prostitute Michelle Lucas died in agony and terror, utterly alone. The sight breaks the heart of Sergeant Bev Morriss of West Midlands Police. She thought she was hardened, but gazing at Michelle’s pale, broken body she is consumed by a cold fury. She knows this case is different - this is the one that will push her to the edge. Plunging herself into the seedy heart of Birmingham’s vice-land she struggles to infiltrate the deadly jungle of hookers, evil pimps and violent johns.

But no one will co-operate, no one will break the wall of silence. Is it fear or guilt? When a second victim dies, Bev knows time is running out. If she is to win the trust of the working girls - she has to take the biggest, most dangerous, gamble of her life…out on the streets.

What listeners say about Working Girls

My Review
It doesn't take the listener too long to realise that author Maureen Carter is a class act. As a former commercial radio journalist, B.B.C. journalist, producer and presenter (wow!) she brings all the pizzazz and sparkle of her journalistic writing skills to the world of crime fiction.
"Working Girls" is the first book of the British police procedural series starring D.S. Bev Morriss, and is set in Britains' so named second city, Birmingham. For those who may not know, Birmingham is a massive city located in the West Midlands of England.
I liked Bev Morriss' character from the very start, she is a woman working in what is still a male bastion, and in the course of her work has no doubt, been exposed to the sights of terrible crime and its awful aftermath. Yet she hasn't turned in to one of those hard hitting smart mouthed and know-it-all characters so typical of many a detective novel, no, but she is smart! Yes, she is a bit gobby, mouthy or lippy - depending on where you come from, but she knows people, and knows how to talk to them.
Shocked by the murder of young schoolgirl prostitute Michelle Lucas, Bev, against the better judgement of her superior officer, knows that to protect the girls and get the information she needs, she must join the girls on the street.
I liked the way Bev interacted with the working girls, how she somehow negotiated her way into their world simply by understanding the unspoken terms of the agreement. She knows that however much these girls grow to like her (in spite of her being a cop) ultimately, she can never trust them to tell her the whole truth and she knows why. She understands the certainty of the retaliative cruelty and violence they would suffer. Self preservation underpins their interaction with all authority, if they grass on their pimps they will suffer. Bev finds herself up against some formidable suspects, but nobody is talking.
Bev isn't inured to the horrors of murder, yet she tries hard to conceal any emotional reaction she has from the other officers in case they perceive her as being weak. The impact of the horror and the senselessness of it all seems to drive her in her need to bring justice for the victims. It is this characteristic which also makes her a little single minded in her investigations, she goes forward fearlessly, and, on occasion, a little rashly. This results in a scenario which is somewhat typical of many a female sleuth; where a lapse in using a bit of common-sense lands her in a predictably dangerous situation. I like that the author has made her fallible, she is no super sleuth, just a hard working cop getting on with the job.

On a more lighthearted note, there are also a couple of little side stories to intrigue! Maybe, just maybe, a couple of budding romances? Bev is possibly lining up a new boyfriend for the future, and is her new friend the overworked, overtired and somewhat brusque Dr. Thorne batting her eyelashes at one of Bevs colleagues?

This story is a page turner, and, despite a pretty obvious red herring or two, I thoroughly enjoyed it, it is so well written. I thought the dialogue to be spot on, and the character and location descriptions can't be beaten. As I listened, I clearly saw these people in my minds eye, the vulnerable girls, the awful all-powerful Charlie Hawes, the haughty school mistress, and I could envisage them in their surroundings, I was repelled by the dirty dinginess of Annie Flynnes kitchen, and I felt bad for some of them. Yes, I guess you could say the writing engaged me, it certainly hooked me right in to this well crafted story and I'm ready for more. I believe there are now seven novels in the D.I. Bev Morriss series, as yet only three are in audio form, we need more audiobooks!

Narrator
Narrated by Frances Barber, an Olivier award nominated actress (that's big) with a very distinguished stage and television career, therefore I expected great things! Thankfully, that's just what I got, gorgeous, easy to listen to voice, and as one would expect, perfect timing and pace. To say she does accents well is a bit of an understatement, it's no secret, people from Birmingham talk funny, really funny, (no offence) it's the famous Brummie accent, and Frances nails it. How she switches between the Brum and the Cockney with such seeming ease is pure skill. When listening to her, one doesn't have think about such things as "characterisation" and "gender changes", she just does it, just like that, with such consummate elegance that before you know it, all these characters are just conjured up for you, like magic.
This audiobook was given to me by the publisher Creative Content, in return, this is my honest review

Publisher's summary was accurate, the story moved along nicely. Well worth a credit and a decent new series.

it was a great story line but I wasn't brave in the beginning to listen to the entire book. put it down as it was grafic then started it back up again. the drama is amazing and makes you cringe. well done! I made it! lol

A wonderful story that makes you feel close to the characters.

Narrated beautifully too, Frances Barber is a master at playing characters on screen and has delivered her acting skills just brilliantly in this story.

Thoroughly enjoyed this book and shall be buying more by Maureen Carter.

Unsubtle and narration all wrong!

What disappointed you about Working Girls?

I found it to be just too unsubtle. It lacked any complexity. In addition, the narration was close to received pronunciation and street slang delivered in that doesn't work at all. Sadly, I will return it.