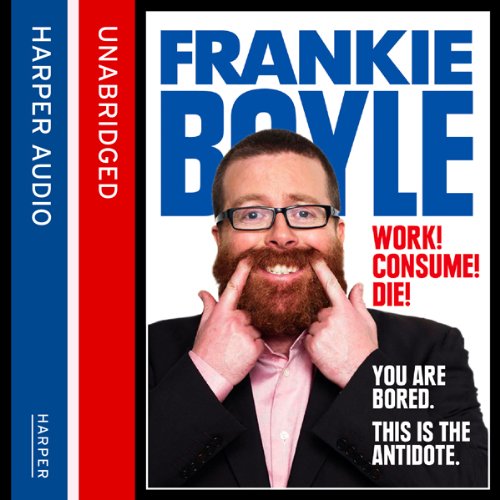 Brace yourself, Frankie’s back, and he’s more outspoken and brilliantly inappropriate than ever.

There are fears that this Christmas could see the start of a double-dip recession, or worse still a double-dip-with-misery-sprinkles and f**k-where’s-my-job?-sauce. Why not chuckle into the howling void as taloned fingers reach up to consume you with Frankie Boyle’s new book, Work! Consume! Die!

In Work! Consume! Die! stand-up comedy's favourite pessimist, Frankie Boyle, offers his outrageous, laugh-out-loud, cynical rant on life as he knows it. He describes your reality as viewed through a bloodshot eye pressed against a shit-smeared telescope, focused on hell:

Reviews of My Shit Life So Far: "If you are suffocating in cosy Christmas cheer, this abrasively cynical, relentlessly misanthropic book might feel like a welcome faceful of ice-cold water straight out of the Clyde." ( The Sunday Times)
"Quite triumphantly, this is the most abusive, obscene, insulting memoir yet published… Many, many funny lines here. A difficult book to read sedately in public." ( The Evening Standard)
"He has a shocking, acid-tongued wit and his sharp observations make this one of the funniest autobiographies I’ve read." ( The Sun)

The narrator was a great choice, and it was just as good on second listening. I don't know if Frankie is an acquired, but his dark humor really speaks to me.

If you could sum up Work! Consume! Die! in three words, what would they be?

If you're familiar with Frankie then you know what you're getting into; if unsure maybe check him out on YouTube to see that he's the right fit for you. Great price!

Hilarious, exactly what you would expect from Frankie Boyle. However, I ended up having to read my friend's copy because of the bad choice of narrator.
Apparently they just decided to get any ol' Scottish person to do it. His voice keeps dropping out mid-word, making it difficult to understand. The narrator has no sense of comedy intonation. After ten minutes, I gave up because I was crossing between trying to understand what word he had just said and trying not to fall asleep.
A good paper book, not a very good audiobook.

Uncomfortable, line-crossing, irreverent, foul mouthed creativity at its best which is no doubt illegal in places! And Supurb!!

Maybe Frankie should have read it.

I like Frankie Boyle, like many people I've enjoyed watching him pushing comedy to the limits of what is socially acceptable, however... there's a point at which amusing irony crosses over to the realms of acidic diatribe and that is precisely what happens with this book. Maybe Frankie's problem is that he loses the non verbal part of speech and the body language that make him funny in person.

Wow! Frankie has a soul after all - called "Angus"

I read Frankie's first book and like most people concluded I wouldn't want to live next door to him. With this book, a mix of anecdotes, diary items and flights of imagination - all interwoven - it's not always obvious moment to moment whether the stories are real or imagined. Nevertheless, after reading it, I liked the author a lot more and recognised that he is indeed far more rich - in money and mind - than some of his other works suggest. Well written in a highly accessible non-writerly way, well spoken by the narrator too, who somehow channels much of Frankie's spirit and manner without actually attempting an impersonation. An interesting book that sticks in the mind and not the craw.

good book but I was expecting Frankie himself to be reading it. lazy ginger prick. 😂

nothing like i was expecting. frankie boyle at his worst. didnt finish as boref witless

An insight into Franky's twisted outlook......

This isn't a book filled with mock the week type gag's. Boyle delivers his outlook on the entertainment business, politics, foreign affairs and the economy. The book does digress off to
some hilarious stories and anecdotes some of which make you think if Boyle is clinically sane. Boyle doesn't narrate this audiobook but don't let that put you off as the voice actor nails it!

I'm a huge fan of Frankie Boyle. I just couldn't get into this. I'm keeping it as I'll keep trying. I must be missing something given some of the other reviews!