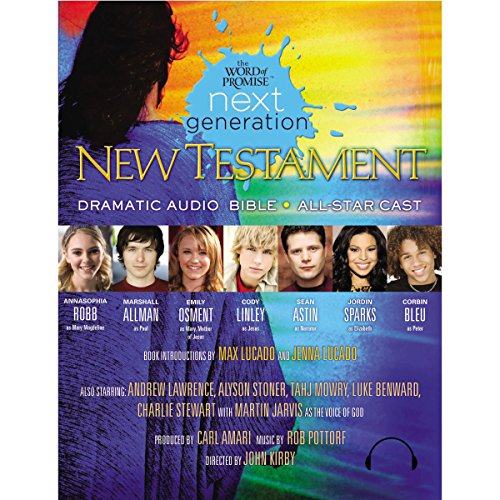 Now the entire New Testament is ready for the Wired Generation.

Today's youth ingest media at a faster rate than any previous generation. And they can't get enough! The Word of Promise: Next Generation - New Testament is the perfect way for young multitaskers to absorb scripture. This ambitious recording makes the word accessible to more kids than ever before.

Starring a Hollywood-level cast of young talent including Cody Linley (Hanna Montana, Dancing with the Stars) as Jesus, AnnaSophia Robb (Charlie and the Chocolate Factory) as Mary Magdalene, Jordin Sparks (American Idol winner) as Elizabeth, Cobin Bleu (High School Musical) as Peter, Alyson Stoner (Cheaper by the Dozen) as Martha, and narrated by Sean Astin (Lord of the Rings). The project includes informative book introductions by author Max Lucado and his daughter, Jenna Lucado, who is a speaker on the Revolve® Tour.

The Word of Promise: Next Generation is much more than just a word-for-word reading: it's an all-star cast performing audio drama with a rich original score and Hollywood special effects. When Jesus walks on the water, kids will feel like they're in the boat. When Peter waits in the courtyard during the Lord's trial, the fire will crackle. The ambient sounds of the Holy land, the breathtaking musical score, the world-class young actor,s and the timeless Word of Promise all combine to deliver an unparalleled achievement.

Performers were almost monotonous. No passion. Sound like there were in a classroom being forced to read it. Very disappointing.

Enjoyable way to listen to the Bible.

This is a good translation for new or young Christians to hear the Bible.

Like most scriptures, you need to read or hear what the words really say, some text can be misleading and other text can lead you to eternal life. Parables 14:6