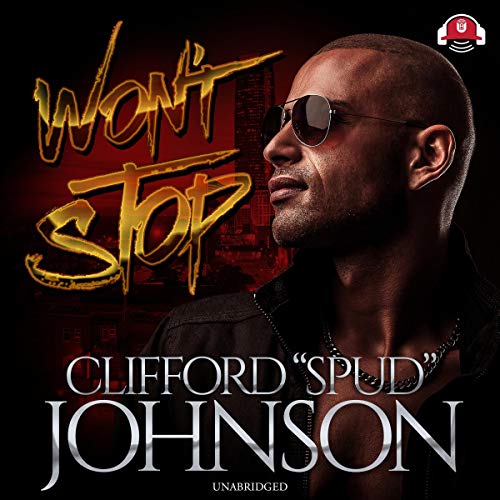 Hot Shot is at it again! Now that it's been revealed that he is an undercover FBI agent assigned to clean up as many urban cities as he can, Hot Shot and his trustworthy comrade, Cotton, take their skills to Oklahoma City to deal with some serious gangsters who run the drug trade.

Nola wants no part of a relationship with Hot Shot after her family is incarcerated. He has never loved a woman the way he loves Nola, so dealing with that loss on top of the loss of his parents and little brother has Hot Shot on the verge of committing murder. He is determined to get his woman back at all costs, and the streets of Oklahoma City will run red if someone steps to him the wrong way.

Oklahoma City is about to experience Hot Shot, the guy who's doing bad in order to do some good. Won't Stop is full of twists and turns that will keep you resisting pauses to hear just how far this hero with a mean streak will go.

What listeners say about Won't Stop

Love, love, love Hot Shot. The book was so good. I did hate what happened to the Sin Sister's. I really wanted to see hot shot back with nola or is it lola. The book was great 👍👍👍👍. I am waiting for book three. Keep the great books coming.

this book is one of my favorites. I was so caught up that I spent my days off trying to finish this book.

I read book one and definitely was eager to read this second book. The storyline did not disappoint. And let's talk about the narrator, Stevie Washington; superb performance- he carried every character well. What did annoy me were the explicit sex scenes. Much to much for my liking- so I ended up fast forwarding those scenes. And Hotshot need to stop falling in love so easily.
With that said, I'm ready for book 3

This was very entertaining however the similarity in the names like big shot, big shoot, big shooter, little shot, hot shot made it difficult to identify who was who. The narration was outstanding and the storyline held my interest you the end.

The narrator takes this book to another level. I wish he read majority of these books. I wish there was a part 3.

I the first book can't stop, and enjoyed and wanted more. so I could not wait to get into won't stop. l don't want to give up too much info, but the main Character Falls in love too easy to Be a man. Especially one that is aggressive as he is. However I do wish there is al follow up to this book.

I love Hot Shot! This book had me wanting more... I can wait to see if there’s a part 3 because honey I need more!

Considering how disappointed with the Gansta Twist series, I must say that this one had a true ending. i wasn't left wondering what happen, so I was pleased with Can't Stop and Won't Stop. I don't normally read these type of stories withe the exception of Brenda Hampton however, I may consider more of Mr, Johnson's novels.