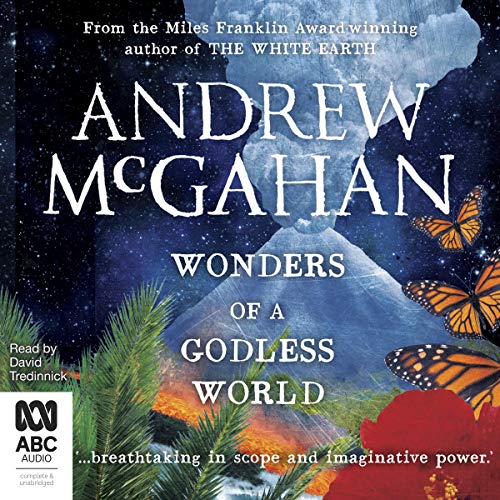 Wonders of a Godless World

Suspend disbelief and immerse yourself in an electrifying, tumultuous work of the imagination - a powerful and apocalyptic tale of madness and revenge, desire and devastation. You'll be swept from the beginning of time to the end of the earth.

On an unnamed island, in a Gothic hospital sitting in the shadow of a volcano, a wordless orphan girl works on the wards housing the insane and the incapable. When a silent, unmoving and unnerving new patient - a foreigner - arrives at the hospital, strange phenomena occur, bizarre murders take place and the lives of the patients and the island's inhabitants are thrown into turmoil. What happens between them is an extraordinary exploration of consciousness, reality and madness.

Wonders of a Godless World, the new novel from Miles Franklin winner Andrew McGahan, is a huge and dramatic beast of an audiobook. It is a thought-provoking investigation into character and consciousness, a powerful cautionary tale and a head-stretching fable about the earth, nature and the power of the mind. It is utterly unlike anything you've heard before - it will take you by the shoulders and hold you in its grip to its nerve-tingling finale.

What listeners say about Wonders of a Godless World