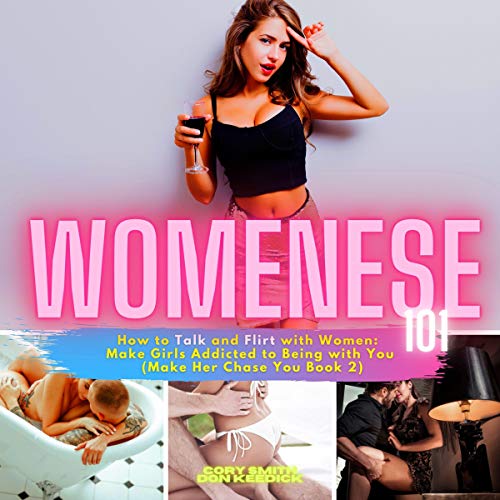 Womenese 101, How to Talk and Flirt with Women

Do you ever find yourself in a situation where you want to talk and flirt with a cute girl (that turns you on and you want to bang) but you don't know what to say, and how to communicate with her in a way so that she will become deeply attracted to you?

This audiobook is the key that you have been waiting for; it will teach you how to talk and flirt with a woman in a manner that makes them dripping wet.

50 hardcore laws of womenese to know what she really means when she says cryptic statements.

11+ specific She-Wants-My-D-Right-Now Indicators, so you can recognize the opportunity and immediately capitalize on it

Specific ways to test a woman to see if she is down for intercourse, or a waste of time

List of 87 things women say versus what they actually mean

Specific Body Language Signals that show that a woman is sexually interested in you, and you need to physically escalate on her all the way to sex.

PART 2: Use the Signals

The Fast Girlfriend Method Revealed: what to do to turn a woman into your girlfriend - including highly specific strategies

What listeners say about Womenese 101, How to Talk and Flirt with Women

I have read these kinds of materials for over a decade and this is the sum total of all you need to have the frame of mind necessary to navigate this newly womanized homosexualized landscape; no harm intended to either group! The content is on point Cory did great and the narrator is out of this world maculine in an unapologetic funny way; buy it you’ll love it and enjoy it. It’s worth the credits to secure a masculine edge!

One of the best audiobooks ever

Not only is Don Keedick’s performance absolutely but this is also one of the best and most practical books I’ve read on women. Highly recommended.

Great at helping me change perspective

Before hearing this audiobook I had trouble approaching the whole 'dating thing'. I heard the author speak on the radio and it led me to buying this audiobook. I definitely feel more positive about it now.

A guide for all age groups

Listen about this audiobook in The Mail on line. The real thing doesn’t disappoint. With so much reliance on the Internet today it is reassuring to learn about how to find yourself on a human face to face level. Entertaining and very easy to understand.

This audiobook gives you a good insight

Very interesting and important in view of of improving self respect and value.This audiobook gives you a good insight into the world of flirting and more importantly the encouragement to go out and meet people without the need to do this online or thorough social media.

This audiobook was very specific with its instruction and suggested practices that really made sense in the real world. It made a difference right away when I mustered the courage to apply the conversation techniques and strategies explained in the audiobook.

This audiobook was going to touch on only how to start conversation with women and succeed at that. However, it teaches you how to exude ultimate confidence which is very important to getting girls in the sense that girls normally give guys with confidence more chances than they do guys with little or no confidence.

I really liked the audiobook. I love how down to earth the author is and how to the point the fact is to approaching people.

A audiobook for both men and women, Flirtology is a mix of flirting for dummies, an SOS guide to human connection and interaction (not just romantic), and a clear-head common-sense advice on healthy dating, no-tricks, no-fake approach to dating.

The audiobook was clear, concise yet still very thorough. It covered a variety of subjects pertaining to being successful with women and had some very good eye opening information that certainly is useful and helpful.